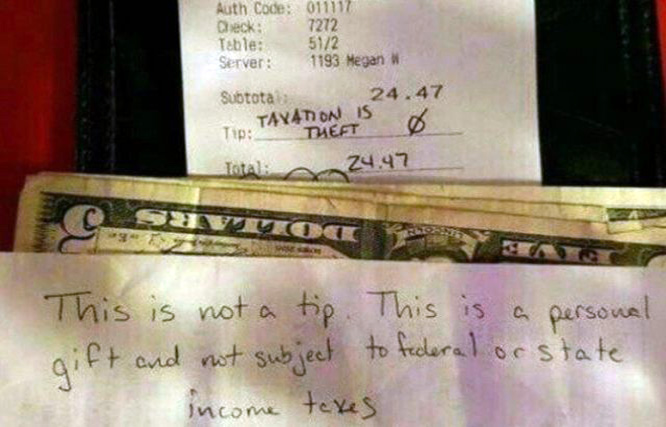 When you go to dinner or to the bar or someplace were tipping is customary, the libertarian will write #TaxationIsTheft on the tip line on the receipt and will leave a cash tip. They will also write a note saying, "This is not a tip. It is a gift and is therefore not subject to taxation."

OK, so how does this work? I have asked a couple of servers at restaurants here in the Las Vegas area and they have told me that when they receive a tip they must share some of that tip with their busser and their bartender. They tell me this normally amounts to about 6% of their tip. They must also tell their employer the total amount of their tips received so the employer can report that to the IRS as is required by law. So in this case does the server have to tell their manager or buser or bartender about the gift that you left for them? That is up to them. Hopefully they will do the right thing, whatever that right thing means to them. So why is telling the server that it is not a tip and is actually a gift important? Because gifts under a certain dollar amount are not taxable by the government. I will let you do the research as to what that amount is as it varies from state to state but I am pretty certain that it is far less than the amount you would tip your server at the local Applebee's.

So how do I help facilitate this event? I went to Vistaprint and had some business cards made up. The card says on the front "This is not a tip. This is a personal gift. It is not subject to federal or state income tax. Have a nice day." I also have the URL of the Libertarian Party of Nevada printed on the card and suggest if they have any questions or want more information they can go to the LPNevada website. So now whenever I go out to dinner or someplace where I normally would leave a tip I write #TaxationIsTheft on the tip line and leave a card along with the tip in cash.  (Sure, this cheats me out of some bonus points on my credit card, but hey, it is a small sacrifice for a potential increase in freedom and liberty right?) 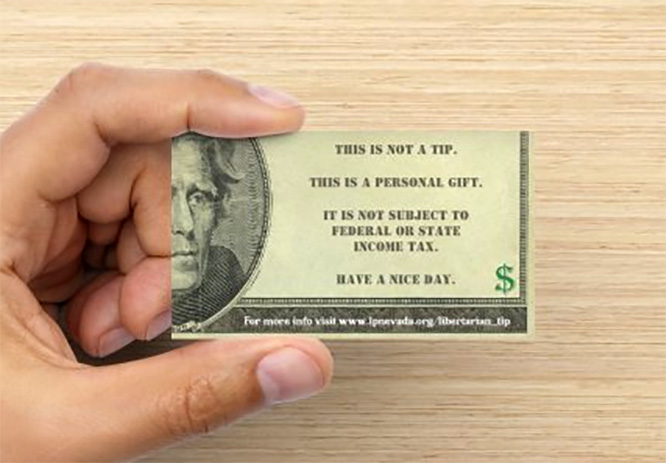 You do not have to have cards made up. You could just write a note on the receipt. Many do that. I like the idea of the card as they can take it with them and show it to their friends or fellow servers. (You can also order them at LPStuff.com where you can get 100 for less than $4 but I prefer Vistaprint where I can get 500 for about $13 and they are customizable so you could help bring traffic to your state party. Still, LPStuff has lots of cool, uh, Libertarian Party stuff so be sure to check them out.)