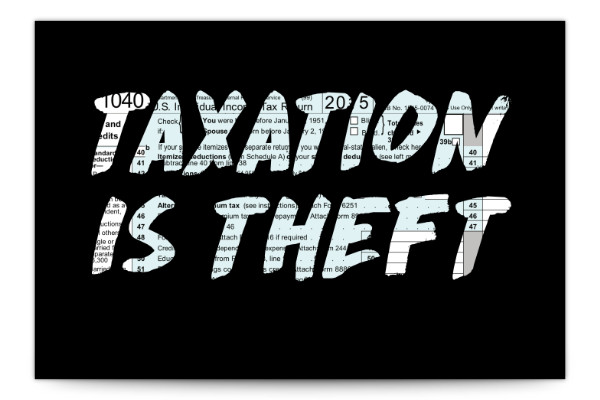 It happens every paycheck I get. A big chunk of money is missing. Where does it go? To taxes. It is a common battle cry around the  Libertarian party, "Taxation is theft!" especially around tax time in April. But is it? Is taxation theft? Are taxes necessary? Let's examine this idea for a second...

So first off what are taxes used for? They pay for things like Social Security and prisons and wars and police and paying off police misconduct settlements and schools and libraries and oh yeah, the one that is cited the most often so it seems, roads.

Once I ask someone why taxation is theft and he said that tax is a coerced contribution to state and federal revenues. Coercion is force. Contribution is a payment. So a tax is a forced payment for services you may or may not use. Theft is the taking of another persons property without that person's permission or consent with the intent to deprive the rightful owner of it.

So these things that they are taking the taxes for without my permission, do I really need them or is there a different way they could be paid for? I do not directly use elementary schools. Why should I pay for them? I do not take the bus so why am I paying for them? Let's take the ever so common idea of taxes paying for roads. So the way I understand it, the government pays for the road leading up to my house with tax money. I suppose we don't really need a road. We could just have a gravel road. (Sure, it is still a road but work with me here.) The gravel road would just destroy my car I guess. So gravel roads are out and that nice asphalt road is a good thing to have. But do I need the government to pay for that? What about all those other roads that I don't use. Should I be paying for those? A lot of people say that the roads could be privatized. Yeah right like that's going to work. Who's going to buy the roads? Is Jimmy, my coworker down at the factory, going to buy a road? I doubt it. Seems like most of the people in the factory are living paycheck to paycheck. Not a lot of extra money floating around to be buying up roads in the neighborhood.

So who could buy and privatize roads? I suppose Mr. Big could. He probably has enough money. In fact I hear that people like Mr. Big take advantage of many different loopholes in the tax laws and do not really pay the same tax rate that I pay. Seems Mr. Big can afford to hire a bunch of lawyers and accountants and people like that to ensure he does not pay a whole bunch of taxes like me and Jimmy. And then even if Jimmy did buy a road and somehow could maintain it what happens if there is an issue like a pipe or some wiring or something under the road breaks. Then who fixes that? Jimmy certainly can't afford to repave the road after it gets tore up by the guy who has to repair his pipes that broke underneath Jimmy Street. So I guess it's up to Mr. Big to buy up all the roads. Oh yeah, but when Mr. Big buys of all the roads, that's called a monopoly… Or the government.

There are some things that probably should be taken care of by the government using our tax money. They need cash to do these things. I suppose the police force and the fire department should be run by the government. The judicial system should probably be run by the government. I hear the salaries for newly elected congressmen and higher level politicians are astronomical and out of control. Maybe that should be addressed although I doubt it ever will be. Just the same the government probably needs to be running the government. (Does that seem odd? No wonder those big salaries will never go away.) Private citizens could run things like the library or schools or parks and recreation. But I can barely get Jimmy to oil the machines and produce the number of widgets in his quota every day down at the factory. How am I going to count on him to keep the library stocked with books?

Is there a better way to deal with taxes? Should the rich people have a higher tax rate than the poor people? Or should there be a sort of 'fair tax' or 'consumption tax' where everybody pays for items they consume or purchase? That to me seems like a good idea. That way the drug dealers pay taxes too.

What are your thoughts on taxation? Is taxation theft? Or is it a 'necessary evil?' Or is it both?