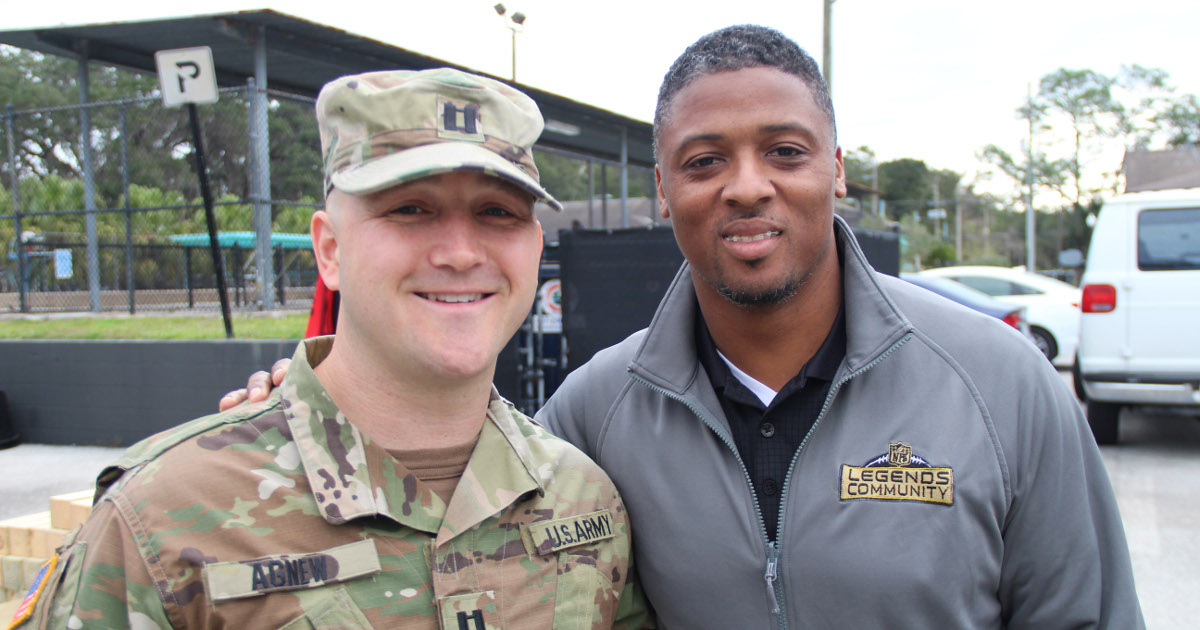 Many of our readers have probably not heard of Warrick Dunn, former running back for Florida State University and the National Football League’s Tampa Bay Buccaneers and Atlanta Falcons.

Dunn had a great college career, winning a national championship with the Seminoles in 1993. He followed his college success with a very good twelve-year career in the NFL. He made the Pro Bowl three times, although his successes were overshadowed by the likes of Shaun Alexander, Adrian Peterson, and Corey Dillon.

However, his most important legacy is the Warrick Dunn Charities and Homes for the Holidays. Started in 1997, when he was a rookie running back in Tampa, the charity builds homes for single parents and their children, makes the down payment on them, and secures financing for them.

We don’t think people should be held up as role models just because they’re famous athletes. But we’re happy when they become role models via exemplary behavior.

James remembers Dunn’s legacy because he was a Buccaneers season ticket holder during this time, and he found it quite impressive for a rookie running back to launch such an effort just a couple of months into his NFL career. He became a Dunn fan, not only on the playing field, but also in the community.

Dunn, now retired as a football player and a minority owner of the Atlanta Falcons, provides a ten percent down payment and arranges an interest-free mortgage for the homes he has built. To date, only one family has lost their home in the 20 years since he started the charity.

From his charity website wdc.org, we read the following:

“Warrick Dunn Charities has awarded millions in home furnishings, food and other donations to single-parent families and children across the nation to combat poverty, hunger and ensure families have comfortable surroundings and basic necessities to improve their quality of life.”

Many athletes have started charitable organizations during their careers, and many have done great things for their communities. However, Dunn has been making this difference since he inked his first professional contract.

Because of his mother, Betty Smothers. She was a Baton Rouge police department corporal, who was killed in 1993 when Dunn was a freshman at Florida State.

Betty Smothers was a single mother raising Warrick and his five younger siblings when she was ambushed and killed working a second job as a security guard.

Warrick was the first member of the family to get to the hospital. At only 18 years old he was tasked with identifying his mother at the hospital, and subsequently making all the funeral arrangements.

He then assumed the responsibility of raising his five younger siblings.

In 1997, Dunn was picked in the first round of the NFL draft by the Buccaneers, and he started his charity. Why? Because one of the dreams his mother was never able to fulfill for him and his five brothers and sisters was the dream of homeownership.

As Dunn said in a USA Today article December 13, 2016, “Home ownership is the quickest way to grow wealth in this country.”

At the time of that article, his charity had presented 153 homes to single parents in 15 different communities, including Tampa, Atlanta, Tallahassee (home of Florida State), and his hometown of Baton Rouge.

Although Warrick Dunn Charities and Homes for the Holidays are his most visible works, Dunn was also instrumental in raising over $5 million for victims of Hurricane Katrina. He made an open letter appeal in the September 12, 2006 issue of Sports Illustrated asking fellow players to donate $5000 each to the victims.

In the letter he said, “A city that has given our league and our sport some of its best moments is in ruins. An entire region is in pain, a region filled with people who have paid to see us play, who have bought our jerseys, who now have nothing. What will it say about us -- not as football players but as human beings -- if we don't give back?”

So, help others and give back to your community to the extent you can. Help the less fortunate.

Be like Warrick Dunn. People will look up to you.

SHOWING UNITY AS A COMMUNITY 143d ESC PARTNERS WITH NFL TO KEEP 'THE CITY BEAUTIFUL' by 143d ESC is licensed CC BY 2.0.