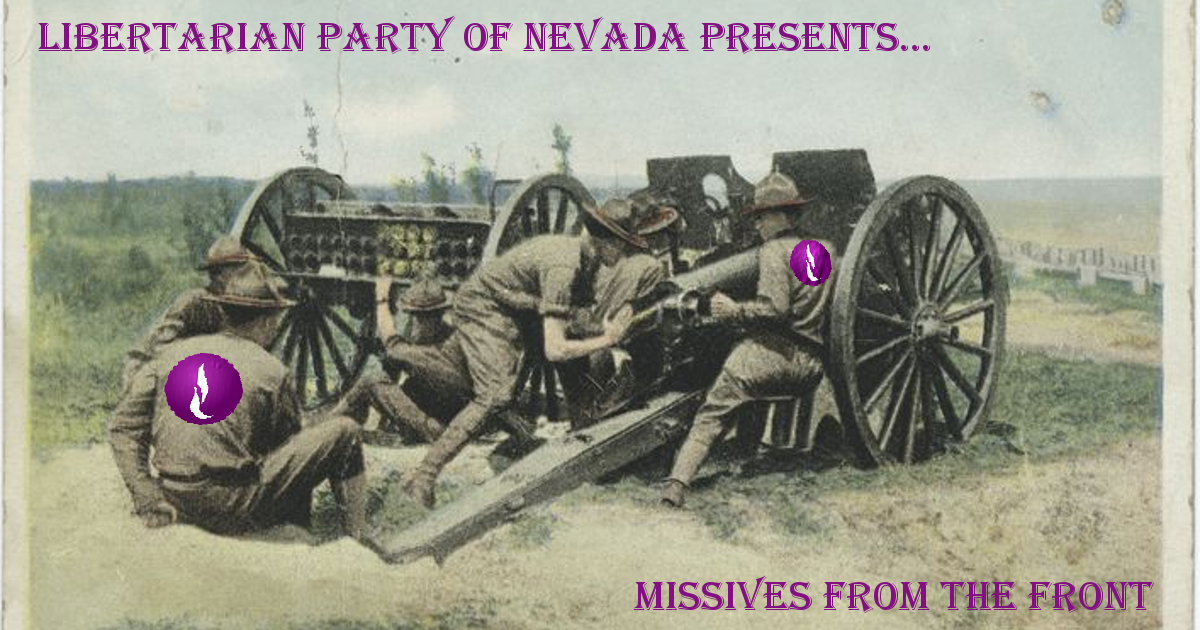 Greetings once again from the front lines of the 79th Session of the Nevada Legislature! Today marks the 100th day of the session - only twenty days remain. This week was packed with activity - not only did I testify for or against many bills in their second hearings, I also actively lobbied many Assemblypeople on SJR4 and a potential ballot access bill for next session.

Throughout the week, I joined forces with Elliot Malin from AFP and met with a number of Assemblypeople regarding SJR4, which I discussed in my last newsletter. This resolution would urge the federal government to amend the Constitution to limit political spending by “corporations, unions, or individuals.” Last week, I met with Elliot Anderson, Olivia Diaz, John Hambrick, and Ira Hansen. Hambrick and Hansen are, of course, happy to vote against SJR4. Anderson is likely to vote for it, and Diaz was quietly noncommittal (though interested in the ACLU’s Amicus brief on Citizens United (though I’m fairly certain she’ll end up voting along party lines, as well). This week I had meetings with Nelson Araujo, Nicole Cannizzaro, James Ohrenschall, and Shannon Bilbray-Axelrod on SJR4, as well. While the resolution passed out of both committees along party lines, Assemblywoman Bilbray-Axelrod and Assemblyman Ohrenschall both stated their reservations for the record as a result of our work.

I also had a private meeting initiated by Assemblywoman Jill Tolles on Tuesday. She tipped me off that AB226, a bill introduced by Assemblyman Hansen which would have closed the Krasner loophole but had been placed on the Clerk’s desk to die, might be getting a second chance at life thanks to Assemblypeople Skip Daly and Olivia Diaz. I immediately went to Assemblyman Daly’s office and set up an appointment with him for Wednesday morning. My plan was to attach our ballot access threshold amendment to the zombie bill. Daly was amenable, but unfortunately, the Democratic party leadership are unlikely to insert the text into any other measure or allow AB226 to leave the Clerk’s desk. But multiple legislators - including Araujo, Daly, and a few others - are friendly to a bill draft request for our amendment next session, should they be reelected.

I started the week testifying in support of AJR10 (a resolution against further development of the nuclear waste storage facility at Yucca Mountain) in its second hearing. After I testified in support of AJR10 (against Yucca Mountain - I know this is confusing) during its first hearing, Assemblyman Chris Brooks sent a very grateful thank-you note, and requested that I support it again. I was happy to oblige. Nevadans have the right to resist federal storage of hazardous waste in our state. Ideally, of course, we’d like to see nuclear waste reprocessing legalized in the United States in order to avoid the need for waste storage facilities like Yucca Mountain, but in the meantime, AJR10 is NIMBYism I can live with.

On Tuesday, I spoke in favor of AB259 for the second time during its second hearing. This absolutely vital bill, sponsored by Assemblyman William McCurdy II, would vacate and seal marijuana convictions that occurred after January 1, 2017. As the private, recreational use of marijuana became legal on January 1, 2017, any Nevadan who was convicted of now-legal offenses after that date is entitled to having the judgment vacated and sealed. The State must not continue punishing those who have committed no crime according to existing law. I was more than happy to work with Assemblyman McCurdy II on this one.

As I mentioned in last week’s newsletter, Senator David Parks asked for our support on SB261, which would legalize the prescription of life-ending drugs to terminal patients in Nevada. The bill is modeled after Oregon’s existing program. One of Senator Parks’s close friends, afflicted with terminal cancer, asked Parks to write and pass a similar law here. That was more than ten years ago, and Parks has been working on it ever since. This is the closest the legislation has come to success - and while the rumor on the street is that Governor Sandoval will veto the bill, we applaud Senator Parks’s bravery and compassion nonetheless. I understand that any form of assisted suicide will be controversial, but SB261 is carefully written to prevent coercion or abuse. It would simply give terminal patients the choice to die on their own terms - an increase in freedom for everyone, and a logical consequence of individual bodily autonomy. SB261 has made it through its first work session vote, so we’ll next see it in the Assembly committee.

Senator Pat Spearman also approached us asking for support on SB396 on Thursday afternoon. I testified in support of the first version of this bill, which offered protections for doctors and massage therapists using marijuana and hemp products to treat their clients. However, it was radically amended: The entire previous text of the bill was deleted and replaced with a brief but excellent industrial hemp legalization bill (borrowing and rearranging from another bill we supported - SB329, a marijuana omnibus). I received the request from Senator Spearman’s office on short notice - just a few hours before the hearing - but was more than happy to speak in its support. Industrial hemp is a harmless product and Nevada’s farmers have the right to grow and profit from it. Legalizing the crop would also make Nevada a national leader in the industry. Even George Washington grew hemp, as did many of the Founding Fathers.

On Thursday morning, I had the second hearing for SB176, which would mandate that peace officers in Nevada wear body cameras. The hearing started at 8:30, but the first bill they heard dragged on and on and on. I also had an SJR4 meeting scheduled with Assemblyman Nelson Araujo at 10:00 AM, and as time crept by, I began to worry that I wouldn’t be able to do both. By 9:40, they closed the hearing on the first bill and finally opened the hearing on SB176. I was able to testify in support at around 9:58, then zoomed to Araujo’s office - only to find that he was also trapped in a hearing. His secretary rescheduled us, and I was eventually able to speak with him on my own.

I attended a budget hearing on Education Savings Accounts with Elliot on Friday morning in the Assembly Ways and Means Committee. Unfortunately, the budget wasn’t passed; instead, Elliot says, SB506 will reallocate funding to the new office. This isn’t the end of ESAs, but definitely a change in course. Elliot does expect SB506 to become law and fund ESAs, ultimately, and I trust his judgment on this issue - he and Americans for Prosperity are passionate about it.

As soon as the committee finished hearing that budget, I dashed upstairs to testify in support of SB236, which would create public-use marijuana permits for businesses and festivals. Marijuana-friendly areas in restaurants, lounges, and cafes would improve quality-of-life for locals and tourists. Now that recreational marijuana is legal in Nevada, people are going to use it outside of their homes, no matter what the law says. Public marijuana use will be safer and more comfortable for all involved if businesses are allowed to create MJ-friendly zones.

I also testified in support of AB301, which would protect the privacy of first responders during peer counseling sessions, for the second time. This bill may seem counter-intuitive - what, you’re protecting cops? - but when first responders don’t open up after traumatic experiences, they can snap in moments of stress, instead. AB301 protects their privacy in peer support sessions - even from orders to disclose by their superiors, which can presently land them in hot water for insubordination should they refuse. This bill makes it easier for police, firefighters, and paramedics to open up when they need to, and therefore easier for them to receive the treatment they need to be effective. I believe that implementing it will help dispel the Warrior Mentality, improving the lives both of public safety employees and those they serve.

While we’ve tried to cover as many issues as possible during the Session, we’ve been able to make concrete progress by allying with the Democrats on criminal justice reform, marijuana liberalization, and LGBT+ issues this session. On May 17, Governor Sandoval signed SB201, the conversion therapy for minors ban, into law. We worked to support this bill every step of the way - and your support helped make that happen.

There’s another deadline on Friday for committee passage - any bill that isn’t exempted and doesn’t make it through a work session will die, which will dramatically winnow out what’s left. As of Wednesday, May 17, there are only about three weeks left in the 79th Legislative Session. Armistice Day is almost here.

I’ve got one final request for you: If you haven’t followed @LPNevada on Twitter, go do it now! We’re pushing for 5k (followers) in May, and it’s one of the best ways to keep up-to-date with our upcoming events.