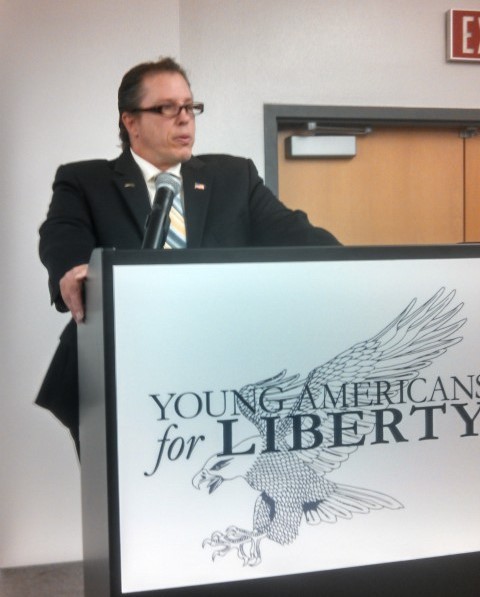 Young Americans for Liberty hosted a state convention at UNLV this past weekend, which was attended by LP Nevada's leadership team. One of the keynote speakers was Assemblyman John Moore, introduced by YAL State Chair (and LPN Youth Caucus leader) Andrew Lea. Assemblyman John Moore is an Iraq War veteran, a businessman, and currently the only capital-L Libertarian serving in a state legislature.

Assemblyman Moore spoke about a number of issues that specifically affect millennials. He discussed the major differences between his generation and the millennial generation.

For example, in the 1970s, it was a common thing for children as young as 11 to start at some kind of ongoing job before or after school. Today’s kids have a much harder time being able to be gainfully employed and learn the value of money and a hard work. Learning to receive instead of earn creates a damaging culture of entitlement.

Millennials also suffer from inflation and rampant runaway government spending. At the rate the federal government spends money and allows the Federal Reserve to inflate the US dollar, millennials will be earning $60,000 a year to live in slum apartments.

Rampant student loan debt made possible by the federal government and predatory Federal Reserve member-banks will be even more crippling in 10 years as interest accumulates. 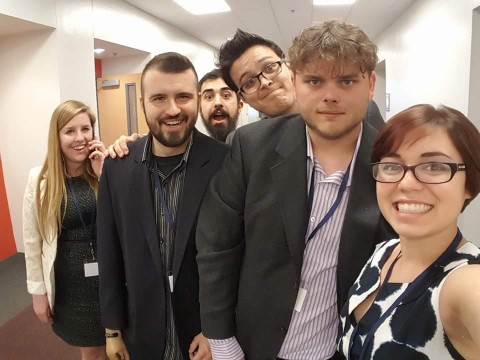 Finally, Assemblyman Moore spoke about the NSA, the FBI, the “Sagebrush Rebellion,” and about the importance of preserving civil liberties. “I went back into the Army after 9/11, I went to war for my country, to defend freedom. My idea of freedom doesn’t include the government spying on all its citizens. It’s unconstitutional and un-American.”

Moore also expressed the controversial opinion that the shooting of Oregon protestor Robert LaVoy Finicum by the FBI was a political assassination. “They had been letting people come in and out of the perimeter, but they’re going to shoot someone two miles down the road? For what danger? Where was his due process?”

After Finicum was killed in Oregon, Assemblyman Moore and one other legislature colleague drove seventeen hours to help negotiate a peaceful agreement between holdout protestors and the FBI. “I just wanted to prevent anyone else from being killed,” said Moore. “We accomplished in an hour what the FBI or the BLM couldn’t, or wouldn’t, accomplish in weeks.”
Assemblyman Moore’s speech was followed by a Q&A session that concluded with a standing ovation.

After the YAL convention and a brief social, LP Nevada Chairman Brett H. Pojunis hosted an incredible party at the Libertarian Party of Nevada Headquarters. YAL co-State Chair Woodrow Johnston commented, “I’m so happy the convention went well and now everybody’s having a good time like a family.”

* YAL is a nonpartisan organization but they're ready and willing to partner with outside organizations like the Libertarian Party of Nevada to advance the cause of liberty. A similar article appeared on YALiberty.org