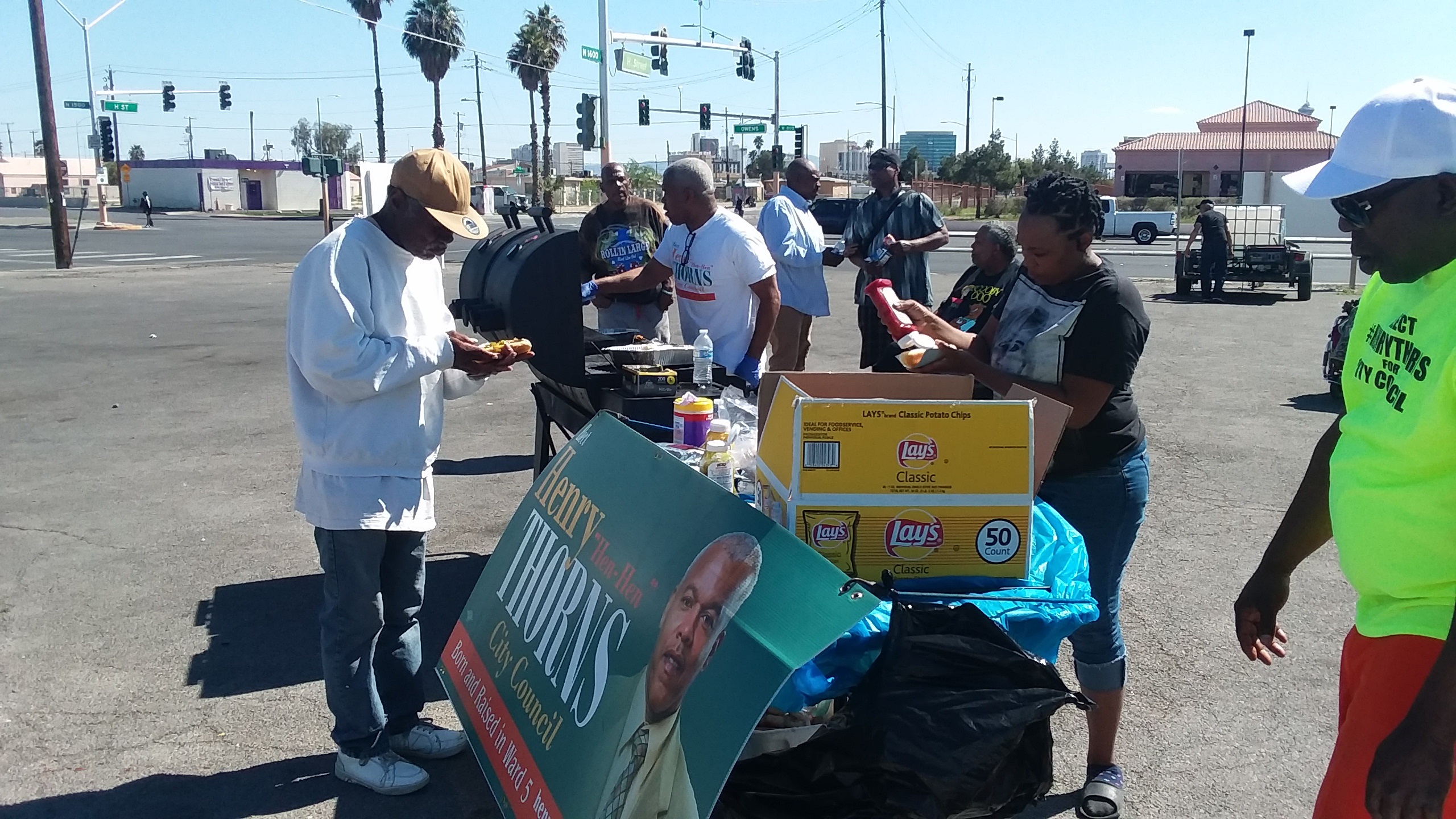 Las Vegas' native son Henry Thorns was grilling up a storm last Friday. Posted in a super market parking lot in the north-central part of Las Vegas, the "historic West Side", Mr. Thorns had a very simple objective: feed the people.

And that's exactly what he did!

Henry Thorns is currently running to represent Ward 5 in the Las Vegas City Council. (The Libertarian Party of Nevada does not endorse out-of-party candidates and blah blah blah, you get the picture.) Though he's not running as a Libertarian, I was exceptionally impressed that Mr. Thorns is walking a very libertarian walk.

In this case, that libertarian walk was daring to break local laws by feeding his fellow human beings without government permission. Only 4 months ago, the Review Journal reported that LVMPD officers were ramping up their ticketing of community activists passing out home-cooked food to the homeless. Well, some of the people who got a free meal that day were indeed homeless.

Many people he fed that day were simply working class folks having a rough time making ends meet. It's likely that some of the people he fed aren't even eligible to vote for Henry due to their having a record--this is MLK Boulevard, not Rodeo Drive. But Thorns turned no one away and asked no one for anything in return. And thanks to the sounds from DJ Ronnie O, Henry Thorns' BBQ block party was slammin'!

This kind of initiative--spreading goodwill through the community by feeding people and turning no one away--is reminiscent of another great example of libertarian action: the free breakfast program provided by the Black Panther Party for Self-Defense. The Black Panthers didn't ask the government's permission either--they just did it. They went ahead and did it every time, and the police and the feds were afraid of these people because, despite their collective poverty, they proved that they could organize on a voluntary basis, collect dues and donations, and rapidly deploy that capital for human development (i.e., feeding the children of poor neighborhoods so they could be healthy and be on their A-game at school). The memory of these programs is kept alive by social entrepreneurs like Henry Thorns who simply get out there and do things.

What Mr. Thorns did that day is also similar to something that the LP of Los Angeles County does in neighboring California. They feed the homeless despite having been warned multiple times by the City of Los Angeles to cease and desist. The reason is because they don't have food handler's licenses; therefore the City is trying to protect people. Unfortunately, the government's idea of protecting hungry people from food-borne illness is to just protect them from getting any food at all. We prefer Mr. Thorns' method--the Black Panther method--of helping and empowering their fellow human being without needing anyone else's permission.

The LP of LA County doesn't play the permission game; neither do we in LP Nevada, and neither does Mr. Thorns as he walks a libertarian walk. He may not be an LP member yet, but we have noticed his strong shows of support for Libertarian citizen-candidates like Robert Strawder, a.k.a. Tha Vegas Don. You never know what the future will hold....