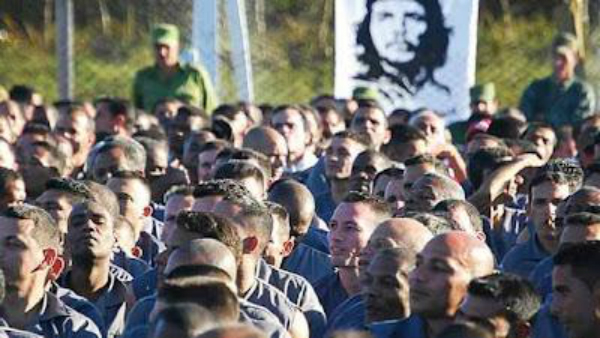 After days of anxious waiting, Libertarians around the world finally have updated news on two imprisoned Cuban libertarian activists.  Ubaldo Herrera Hernandez and Manuel Velazquez Visea were arrested by State Security (Cuba's secret police) on February 2 and detained in a jail in Mayabeque province.  They were being charged with attempted assault, but Mises Institute Cuba's libertarians are unanimous in asserting that both men were targeted for "dissident activism."  As of today, our sources on the ground in Cuba confirm that both men were indeed convicted on falsified charges, are in a labor prison, and now face additional criminal charges.

This dissident activism they were originally targeted for literally consisted of meeting in rooms to discuss civil liberties, limited governments, and free markets, and occasionally distributing flyers and putting up posters.  Other members of Mises Cuba were threatened by State Security shortly after Herrera and Velazquez were first arrested.

Six days ago, Cuban libertarians on the ground, affiliated with Mises Institute Cuba, confirmed that Herrera and Velazquez were transferred to the labor prison Melena II, near Melena del Sur, on the border of Havana and Mayabeque provinces.  The living and working conditions in Cuba's network of labor prisons, Cuba's Gulag archipelago, are subhuman, including at Melena II.  Their transfer to Cuba's equivalent of the Gulag, where political prisoners go to get beaten and do hard labor, made the other Cuban activists believe Herrera and Velazquez had been convicted of attempted assault in a closed-door kangaroo court.  Mises Cuba volunteer staff member and attorney Nelson Rodriguez Chartrand now confirms that both men were convicted, and now face the additional criminal charge of distributing enemy propaganda.

This is Nelson Rodriguez Chartrand's latest report from on the ground in Havana (translated from Spanish):

Hello. I apologize [for the delayed update], but you should know that in Cuba it's [nearly] impossible for the people to access the Internet. Both Manuel and Ubaldo were transferred to the labor prison at Melena del Sur. According to the wife of Manuel [who was granted a few minutes of contact with Velazquez], the lawyer who was initially representing the defendants withdrew his services and quit the case. I'm positive she was threatened by State Security.

Another thing: According to Manuel's wife, they now want to incriminate him with enemy propaganda! As you can see there have been several accusations [several versions of the story of their "guilt"].  This [behavior by state actors] is normal when the information is manipulated and monopolized by the dictatorship. Ubaldo was beaten hard at the police station. We are very fond of everything they have done. That engages us more in the struggle for freedom. You do not know how much I thank you [American Libertarians] for a gesture of solidarity.

The bogus charge of "enemy propaganda" that Herrera and Velazquez now face comes down to this: the Libertarian philosophy is about strongly promoting civil liberties, freedom of speech and dissidence, the right for citizens to own firearms, and limiting the size and power of governments.  Many libertarian economists and authors of the Ludwig von Mises Institute in Auburn, Alabama, which Mises Cuba is based on, take the limited government principle to its logical theoretical conclusion of a peaceful anarchy. Austrian Economics openly disparages Marxism and state-socialism as an economic farce and a human rights violation. These are the peaceful, humanistic ideas are the "enemy propaganda" for which these Cuban libertarian activists will surely be convicted.

There are several things YOU can do as an individual to help our brother libertarians who have been thrown in a labor prison for what we American Libertarians casually do every day.

1) Express outrage at the persecution and imprisonment of Ubaldo Herrera Hernandez and Manuel Velazquez Visea directly to the Cuban government.  Send a Facebook message to the Ministry of Foreign Relations, or tweet directly at them.

2) Contact your Libertarian National Committee regional representative ASAP and ask them to vote YES on the resolution expressing shock and concern over Cuba's imprisonment of peaceful libertarian activists, and that the two men be released.  Email them at their LP address and reach out on Facebook AND Twitter if possible.

3) SHARE and re-share this news on all social media platforms (screenshots for Instagram and video posts for Snapchat too, if you have them).  Share and re-share this news with as many people as you know, especially Cuban-Americans, Hispanic conservatives and libertarians, and anyone who likes to get on a soapbox about the evils of Communism.  It's time for the loud 'anti-Communists' and all the other libertarian armchair activists to actually do something productive for once.

Image courtesy of TFR.org.  The author and publisher grant full permission for this article to be copied and republished, provided a link back to this page is provided.