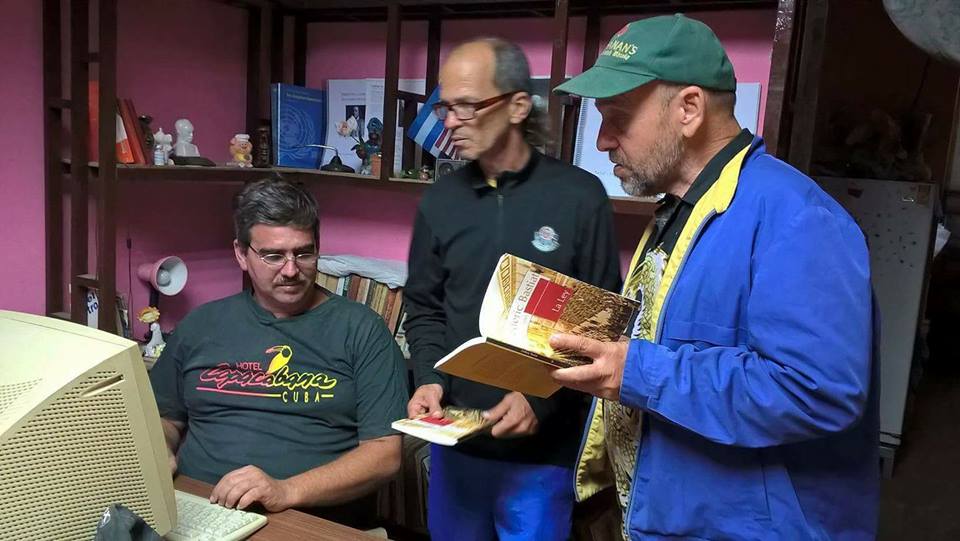 BREAKING NEWS!  A third Cuban libertarian activist was arrested by State Security, the political police in Cuba.  Yesterday the Benjamin Franklin Libertarian Library, a functional library run by libertarian volunteers, held its first conference yesterday in Havana.  Three days before the conference, last Tuesday, State Security threatened every member of the Benjamin Franklin Libertarian Library, and also threatened every member of Mises Cuba and known libertarians, not to attend this conference.  Discussion of free markets and limited governments are a direct threat to the Castro's neo-Stalinist regime.

The Cuban libertarians wouldnt let themselves be intimidated by the political police and the conference happened anyway.  According to the Community Manager of Mises Cuba, the conference was a great success and through small-time networking, more Cubans are interested in libertarian ideas.  Three activists arrived late to the conference because they were intercepted and harassed by police on the way.  They still made it but the police were waiting throughout the day.

Armando Noboa, member of the Benjamin Franklin Libertarian Library, was arrested coming out of the conference and held for a day.  He was released after being interrogated and getting a rough beating by the secret police.  Meanwhile, the other two persecuted Cuban libertarians, Ubaldo Herrera Hernandez and Manuel Velazquez Visea, are still at Melena II, a labor prison in the Cuban Gulag.  Herrera and Velazquez are officially on a hunger strike.

Herrera and Velazquez are launching their hunger strike in protest of their arrest and incarceration, in protest of the sub-human treatment of prisoners in the Cuban Gulag, and protesting against people being arrested in the night all over Cuba.  The Cuban government has been cracking down on political groups ever since the Obama Administration normalized relations with the Castro regime and ended the wet-foot-dry-foot refugee policy.  Most importantly, their hunger strike is a protest against how the Castros' revolutionary regime has become almost exactly the same as Fulgencio Batista's thug regime, only with more poverty and hunger for Cuban workers.

Ubaldo Herrera Hernandez and Manuel Velazquez Visea were both arrested in the night on February 2.  They were arrested on phony charges of attempted assault and are now languishing in the Gulag to this day.  They also face charges of "distributing enemy propaganda."  Armando Noboa, the third known libertarian targeted for his peaceful education-activism, says he's alright, though the other libertarians say he's bruised up and looks shaken up.  He's currently with his family and was released from jail on orders to stay away from the Benjamin Franklin Libertarian Library.

Now that you know what's happening to libertarians, if you choose to stay silent and not share this shocking news, then you are complicit in government persecution of principled libertarians.  Share this link or simply repeat the information to your friends and family in your own words.  Increase exposure by tagging friends, especially Spanish speakers, and also use the following hashtags: #LibertadCuba, #FreedomforCuba, and #TodosSomosMisesCuba