Korean leaders Kim Jong-un and Moon Jae-in met last Friday and declared a historic peace compact between the two countries. While other attempts have been made in the past, this marks the best hope for peace in the Korean Peninsula in 65 years. 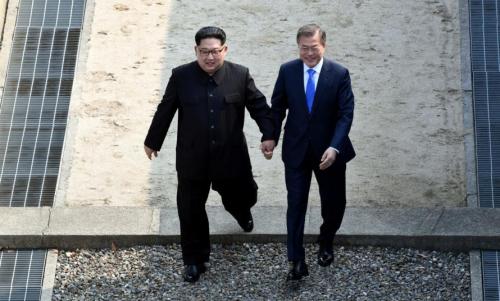 This is hopeful news for everyone around the world. One less place where nuclear war could erupt.

Despite the investment Americans have made in Korea, both in terms of lives lost and money spent, very little has been made of this effort in the Mainstream Media.

Instead, we have been inundated with the Kavanaugh hearings which have devolved into a partisan inferno of vile attacks on both sides of the political duopoly aisle.

As a reformed liberal, I left the Democrat Party when they left me. Marching as a child against the Vietnam War, I took comfort in the notion that the Democrat Party was the party of peace. Weary of the endless war policies escalated during George W. Bush's administration, I welcomed the message that Barak Obama carried with him during his election campaign.

I was furious when he doubled down on all the worst things about Bush's warmongering (drone strikes in particular) and walked back his promise to close Guantanamo.

If you are against endless war for profit and our ever-growing global military presence while maintaining the most powerful defensive military in the world, consider joining us.

Early voting is only 17 days away and the deadline to register to vote is upon us.

Click here to register to vote online. I ask you to consider joining us, the party of peace, by registering or changing your party affiliation today.

Together you and I can make this world a more peaceful place.