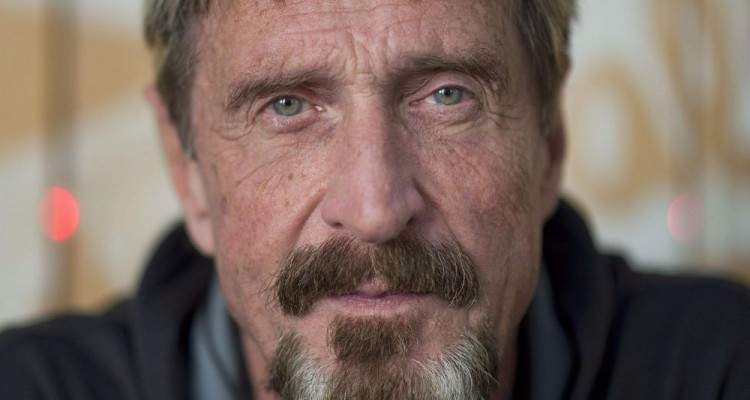 I had the pleasure of interviewing presidential candidate John McAfee at the Libertarian Party of California 2016 Convention, held at the LAX Hilton.  LP Nevada sent a volunteer delegation led by state chair Brett Pojunis to help the LPC with audio/video and communications.  I solicited Libertarian Party members and liberty activists for thought-provoking questions to ask our Party’s candidates.

ZF: First of all, could you give us a quick once-and-for-all proper pronunciation of your name [Mack-a-fee or Muh-kaf-fee]?

John: My dad said Mack-a-fee but then again, he was incorrect about a lot of things.

ZF: That’s horrible.  Anyway, we’ve got some really fantastic questions for you from different Party members all over the country.  So the first question I’d like to ask you is: why are you running for President?

John: I’m running for President because I view the gravest problem facing America is the cyber war that has already been declared against America by numerous sovereign nations, and we’re ill prepared for it.  In fact, many within our government are not even recognizing it.  I’ve been a cyber security specialist my whole life.  Everybody in the cyber security field is panicked about the state of ignorance within our government and within many of the Democratic and Republican candidates.  I’m stepping in because I didn’t see anyone else doing it.

ZF: Alright. Another question from a reader: will you deport illegal immigrants and enforce laws against businesses that hire them?

John: I will not, because I do not believe in the concept of “illegal immigrants.”  Our entire country—and I suspect everyone listening to me—and your parents came from somewhere else, unless you’re a Native American.  In which case, I’ll leave my number and you can call me and let’s discuss this.  Otherwise, you came from immigrants.  Our country was founded on the concept of open arms.  And we need to document people who come into the country because I have to be documented and you have to be documented.

But beyond that, what do we need? Is it a lack of space? No.  I’m an off-roader.  I’ve traveled literally hundreds of thousands of square miles of arable land in this county that no one is occupying.  So is it space?  It can’t be space.  What is it, language?  They will learn the language no matter where they come from.  If they are immigrants, in order to assimilate into the society and get jobs.  So I don’t see a problem.  And if any of you do, email me or call me and we’ll talk about it.  But no, I will not, absolutely not, throw “illegal aliens” out of the country.

ZF:  Assuming Bernie Sanders and Ted Cruz do not win their party’s nomination, how will you help their supporters see the light of our message?

And so how do we get their supporters?  We let them know who the reality of themselves are.  Because the Republican Party and the Democratic Party is a mask that people wear and they weave a veil that they believe is the truth and it is not.

ZF: Who specifically should not be allowed to own a firearm?

John: You know, I don’t think that we should limit it at all.  I think the head of the household, if he’s 21 or older, should buy a rifle and teach his 12 year old son how to shoot.  Beyond that, do we restrict it to only the “sane” people?  Who gets to define sanity—the government?  Me?  Who?  This is the problem with “we can’t give it to the criminally insane.”  But who defines sane?  If we take someone off the streets because they’re derelict and we start giving them drugs to make them passive, and they turn kind of crazy… Why is that?  I don’t know?  I don’t want to restrict guns to anyone.  Now, if someone does get a gun and does something violent with it, then they go to prison like everybody else.  But we cannot be the moral judge, as a government, of other people.

ZF: Alright, last question for tonight.  From what the Global War on Terrorism is today—this campaign stretching over Lord knows how many countries—how does the situation change ideally under President McAfee?

John: Well the first thing is we bring all of our troops home from foreign countries because you cannot stamp out terrorism with future hostilities.  I mean, our hostility as the American nation created terrorism.  It did—by dropping bombs and interfering in the internal affairs of foreign nations and creating suffering, anger, and frustration.  You don’t know. If you had lived under the American abuse, perhaps you would be strapping a bomb to yourself.  But we’re not going to help it by continually bombing and wiping out this cell and that cell and saying “problem over,” because it is an ideological problem that cannot be wiped out with bombs.  Only through actions of understanding and compassion, like bring our troops home.

And secondly, we have a failure in American intelligence.  We’re operating in the Thirties, trying to find out where terrorists are by listening to individual phone conversations.  The world has changed way beyond that.  Way beyond that.  And we need a new paradigm.

ZF: Alright, John, thank you very much for the interview.  Now, where can people find out more information about you?

John: Go to McAfee2016.com and everything should be there.