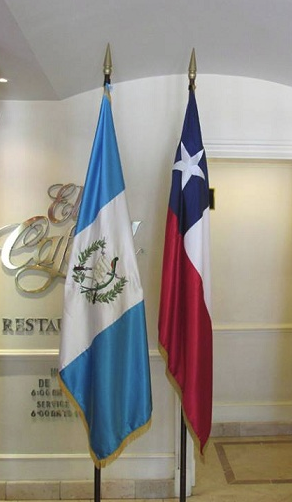 International support keeps growing for the now-famous Cuban libertarian prisoners, Ubaldo Herrera and Manuel Velazquez.  In recent demonstrations of support for the prisoners and opposition to the regime that sent them to Melena del Sur, the Cuban Gulag, libertarians in Colorado, Guatemala, and Chile took a public stand against the Castro regime's oppression of libertarians associated with Mises Cuba and the Benjamin Franklin Libertarian Library in Havana.  The parties involved are the Libertarian Party of Colorado, a libertarian talk radio celebrity in Guatemala City, and independent libertarians in Santiago, Chile.

In a recent press release, the Libertarian Party of Colorado said the following:

In early February, two libertarian activists, Ubaldo Herrera Hernandez and Manuel Velasquez Visea, were arrested in Cuba and convicted of attempted assault and the highly disturbing “distributing enemy propaganda” in short order. There is no evidence of any violence by these activists, and the subversive literature is in fact the type of items that Libertarians routinely read and distribute here in the United States. This conviction is a violation of the human right to peacefully declare one’s political convictions, and further, it is reported that the conditions of the prison where Ubaldo and Manuel are currently housed is the equivalent of the “gulag.” The Libertarian Party of Colorado joins the state Libertarian parties of Nevada, New Hampshire, Oklahoma, Indiana, New Mexico, North Carolina, and Florida in calling for the Cuban government to free these activists by passing the following Resolution:

The Libertarian Party of Colorado condemns the unjust detention of libertarian activists Ubaldo Herrera Hernandez and Manuel Velasquez by agents of the Castro regime in Cuba on February 2, and demands the immediate safe release of these political prisoners who were targeted for their peaceful activism promoting limited government and free markets. We further ask the U.S. government's State Department to place diplomatic pressure on the Castro regime for their release, and encourage Libertarian Party members and supporters to contact their elected officials toward that end.

Recently, Guatemalan libertarian author, activist, and talk radio star Gloria Alvarez dedicated an episode of the politics and current events talk show Libertopolis to the heroism of libertarians in Cuba.  Havana-based activists Nelson Rodriguez and Caridad Ramirez talked about the arrest and incarceration of Ubaldo Herrera and Manuel Velazquez, about the activism of Mises Cuba and the Benjamin Franklin Libertarian Library, and about the government's increased repression against libertarians and all other perceived opposition on the island.  Spanish speakers can enjoy the interview here.

Libertarians in Chile also took a public stand.  Libertarianism is still in its seedling stages across Latin America, where CIA-sponsored terror has made socialism the default 'good-guy' philosophy for 60 years.  Despite their small numbers, independent Chilean libertarians took to the streets of Santiago to protest the incarceration directly in front of the Cuban embassy.  LP Nevada heartily extends a high-five to the handful of Chilean libertarians who did more for liberty with their one action of defiance than most of the armchair activists reading this article.

In recent weeks, the incarceration was also denounced by the Libertarian parties of Spain and Russia.  This movement is growing.  Far from weakening political opposition, the Castro regime has only made libertarianism stronger. LP Nevada's sources in Havana say that Ubaldo Herrera and Manuel Velazquez are converting and new libertarians in the labor prison.  Even in their cell, the hunger strikers are growing the liberty movement in Cuba. Moreover, the Castro regime's repression has strengthened solidarity among libertarians across the world, but especially in the Americas.

Libertarians keep arguing against government intervention in favor of civil society voluntarily solving problems. Now is the time for libertarians to follow through on that standard with action. No one else is going to help our libertarian brothers languishing in the Cuban Gulag. Cuba's libertarians are officially asking the international libertarian community for help.

You can write to several human rights watch groups with the names of the libertarian prisoners. We recommend Amnesty International, The Cuban Observatory of Human Rights, Human Rights Cuba, and the Cuban Commission of Human Rights and National Reconciliation.  You can also directly contact Cuba's Ministry of Foreign Relations on Facebook and call for the immediate release of the libertarian political prisoners (@CubaMINREX on Twitter).  Finally, you can visit MisesCuba.org or email [email protected] to find out how to donate Bitcoins to Mises Cuba snd the Benjamin Franklin Libertarian Library.

** Note: I was recently contacted by one of the Chilean libertarians.  Regrettably, they report that the protest at the embassy was postponed at the last minute in order to protest another, more local injustice, and a person's first priority is to clean up his own house.  Nonetheless, the Chilean libertarians insist they fully intend to follow through with the postponed Cuba protest in the near future.

Image courtesy of Region Coquimbo and has been cropped from its original version.