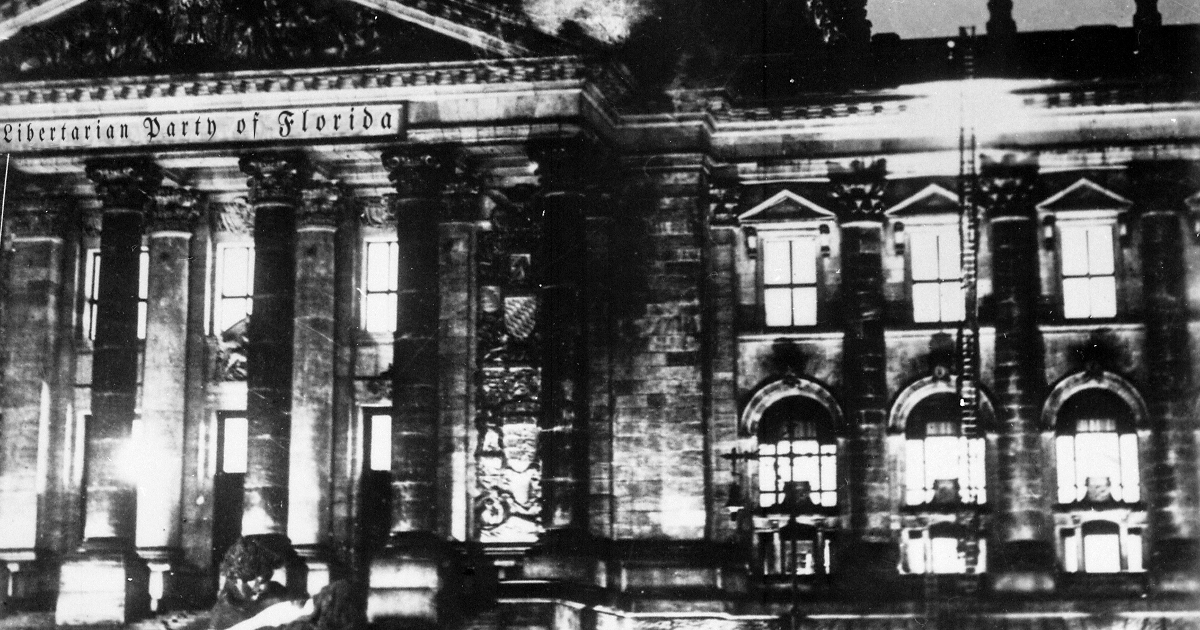 "There's three ways to do things: The right way, the wrong way, and the Max Power way."
"Isn't that the wrong way?"
"Yeah, but faster!"
- Homer J. Simpson and Bart Simpson in Homer to the Max (see clip)

So your state or county affiliate is overrun with people you don't like very much. Perhaps there's someone showing up to your events that periodically threatens to hospitalize people, openly supports eugenics (but not using the state, so that's, like, totally okay, right?), hides behind pregnant women, serves as a guest on openly anti-Semitic podcasts not once but twice, calls everyone that disagrees with him "communists", and "declares hostility against the Libertarian Party" - among other things. Maybe this person brings friends. Maybe you don't like these friends very much and openly say as much. Maybe they don't like that so much and persist in showing up to your events.

What do you do?

Well, there's a right way and a wrong way to deal with this. Let's start with the wrong way:

LET'S BLOW UP THE CONVENTION!

When you take political action, it's important to remember what your goals are and whether or not your actions will advance those goals. The goal of Libertarians United Against Fascism is to prevent a fascist infiltration of LP Florida. That's a noble goal, especially since LP Florida just rolled over in the face of a particularly litigious and, shall we say, polarizing member of theirs. So, with that in mind, if we break that objective down further, we can conclude that they desire:

Here's what blowing up the convention actually accomplishes:

Actually, it's worse than that - if the convention is halted for whatever reason, the existing power structure in LP Florida has all they need to postpone the convention indefinitely, reschedule it at a venue that is openly supportive of the person in question, and then dare anyone that opposes said person to attend the convention while being surrounded by all of the "Roman and not fascist, y'guys" paraphernalia you can wallpaper a bar with. Personally, if I were said member, I'd make it a point to guarantee that a bomb threat was called on the venue specifically to facilitate that very outcome. Why take chances that people might actually oppose you and your friends when you can just call in bomb threat after bomb threat until, eventually, everyone gets tired and you and your friends can stack the deck in your favor?

This isn't conjecture, by the way - my friends and I fought off a similar attempt to do just this in Nevada three years ago.

So what's the right way? To prevent this from happening - to prevent these sorts of people from staging their very own Reichstag Fire - you need to borrow a little Alinsky. Here's how:

“Power is not only what you have, but what the enemy thinks you have.”

Get a slate of candidates put together. Identify every single office in your state affiliate and make sure that every position on that list has one of your people in mind. Do not accept surprises. Make sure you know who these people are, make sure they're trustworthy, and make sure they're motivated. Then, put them to work. LP Florida, for example, has several "regional representatives" - have each of your regional representative candidates hold meetings, social events, and other gatherings to identify potential supporters and ensure they have rides and credentials to the convention. Make sure these activities are well publicized throughout your state. If you do that, the forces you're fighting may realize they're about to be overwhelmed by a tsunami of activity and organization and retreat.

“Never go outside the expertise of your people.”

You're not equipped for a firefight. Maybe you and your friends are feisty, listen to lots of Dead Kennedys, have your Doc Martens on, and are ready to rumble. That's fine and dandy and all, but the people you're going up against have been mentally preparing themselves for this very fight for years. Don't fight at their level; it's what they want anyway, and they frankly have much less to lose. Instead, remember that there are clearly more of you than them and make sure your people are in the room, calm, and ready to stand their ground.

“Whenever possible, go outside the expertise of the enemy.”

To accomplish this, you need to know what your enemy's expertise is. To pick one particular example, perhaps you're going up against a lawyer and some of his unsavory friends - knowing this, unless you have a good lawyer or two on your side as well, directly confronting him via the legal system probably won't get you very far. On the other hand, past experience may also demonstrate that said lawyer does really poorly at elections, especially against a determined and organized opponent that knows how to spread the word about him; perhaps confronting him and his friends in an election for various Party offices would be wise. If you're part of Libertarians United Against Fascism, remember that you have a national network of activists that can blog, write press releases, make phone calls, and provide social media support; his crew might have a similar network, but it's probably far less organized, developed, and effective. Help your supporters in LP Florida by getting the word out to the general population in Florida about the convention, what's at stake, and how they can participate.

“Make the enemy live up to its own book of rules.”

First, the enemy enjoys public confrontation - it feeds into the narrative of victimization and persecution they're using to burnish their image. Second, the enemy must play within the rules and procedures of the state party they're trying to maintain effective control over. If you show up, have a strong enough presence to amend the bylaws (make sure to stream this on YouTube!), and have a strong enough presence to confront him and win (definitely stream this on YouTube!), it'll flip his victimization script on its head.

“Ridicule is man’s most potent weapon.”

Amended the bylaws so he and his friends are toothless? Got your officers in place? Did you win? Now, and only now, may you throw a pie at him. Bonus points if he attempts to hospitalize the thrower of said pie. Make sure to get that on YouTube.

“A good tactic is one your people enjoy.”

This works both ways, remember - he wants to employ tactics his people will enjoy, too. An opportunity to show how tough they are in front of a bunch of "communists" is too tempting for them to pass up. Perhaps if they were suddenly surrounded by a bunch of people that just wanted to give them (((hugs)))...

“A tactic that drags on too long becomes a drag.”

Good job - you successfully shut down an event in Pennsylvania! Maybe do a different thing for an encore?

You know what? I'm going to follow Alinsky's advice - feel free to look up the rest of Alinsky's Rules for Radicals (or read the book - it's not bad!) and apply them to your own situation. Then, once you're done with that, read Jeffrey Tucker's Against Libertarian Brutalism:

But they are not the only reasons that people support liberty. There is a segment of the population of self-described libertarians—described here as brutalists—who find all the above rather boring, broad, and excessively humanitarian. To them, what’s impressive about liberty is that it allows people to assert their individual preferences, to form homogeneous tribes, to work out their biases in action, to ostracize people based on “politically incorrect” standards, to hate to their heart’s content so long as no violence is used as a means, to shout down people based on their demographics or political opinions, to be openly racist and sexist, to exclude and isolate and be generally malcontented with modernity, and to reject civil standards of values and etiquette in favor of antisocial norms.

These are the people we are facing. For years, many of us have been peaceful and accommodating toward letting them call this Party their own. The period of accommodating, however, is over - not because I say it's over, though I most certainly do, but because they say it's over, and have been saying it's over for several years now. They are welcome to organize into a political party, should they wish; freedom of association belongs to even the worst of us, after all. They are not, however, welcome to take over ours - not without a fight. But, if we're going to fight, we have to win, and in order to win, we must remember what our objectives are, how we aim to achieve them, and only select methods that further our goals. Doing anything else is aiding and abetting their cause.