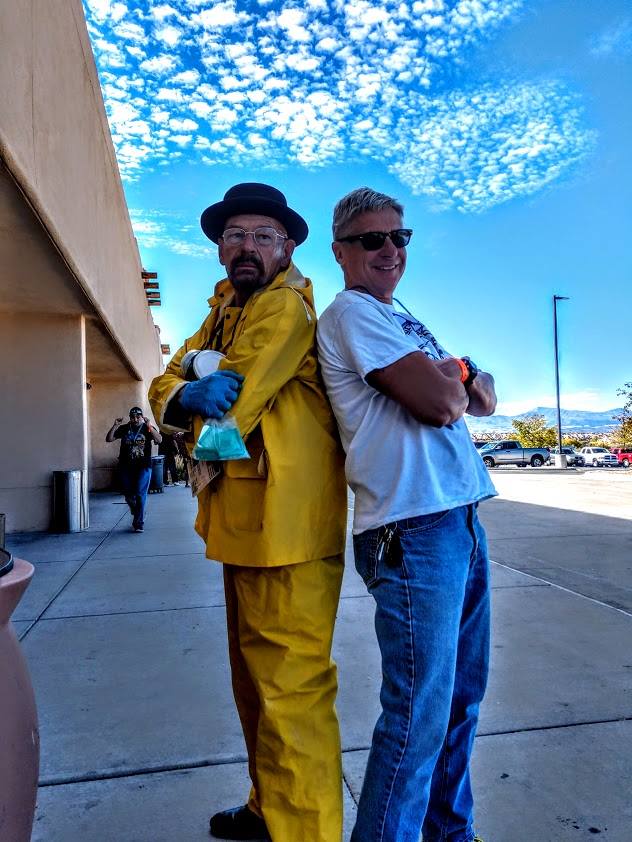 The single most important outcome from Tuesday night is that the Trump machine no longer has a majority in both houses of Congress; the Republicans barely held the Senate (51-49) and the Democrats took the House (223-197). The fact that neither of the two welfare/warfare parties controls Congress, nor can ram their partisan agenda through, is the single greatest win for human freedom. Now, let's talk about the elephant in the room: the LP's performance in this election.

The short answer for why we didn't do better has two reasons: money and ground game. Third parties have always struggled to raise money, but almost every one of our Nevada candidates were completely new and just getting broken in to how politics works. Regarding ground game, all our candidates and their teams of supporters underestimated the amount of hours required for door knocking and making phone calls. I'm glad that they learned these lessons this election cycle.

I want to give special recognition to Robert Strawder, the Vegas Don, the hip hop artist from Digital Underground, who ran for Congress under the Libertarian banner. Strawder is someone who grew up on skid row, who was in gangs, and who worked his way out of a nightmare and into being the underdog on the ballot who gave people hope. It's an honor to have him in this party.

Eight months ago, the crew of candidates I saw at our state convention was entirely green and optimistic. They didn't know a thing other than that they wanted to make a difference. Now they're experienced, they're much wiser, and several of them are ready to run for office again in 2020. People often pour their own time and resources into campaigning, and they get burned out and leave after the election. That was definitely our biggest problem from 2016, yet Libertarians are already eager to continue the fight. This is exactly what we need!

Cleaning up messes in Nevada

While LP Nevada's candidates got single-digit percentage points, we had several important issues that we needed to address. Just like the old proverb says, we shouldn't try to clean up other people's messes until we've cleaned up all of our own. Well, we certainly had messes to clean up. First, a disgraced ex-state chairman of the Nevada LP endorsed Republican Adam Laxalt in a garbage editorial submitted to the Elko Daily Free Press (thankfully a real Libertarian countered that endorsement which reeked of backroom deals for 2020). Not only did this disgraced ex-chairman endorse a Republican over the Libertarian candidate for governor, Jared Lord, but this same person broke away from his party to back the loser. I'm very proud of Jared Lord, and even the other 3rd party/no-party gubernatorial candidates, for helping Laxalt lose.

Second, if we seem a little salty at the Republican Party, it's because we are. We fully credit the Nevada Republican Party and the signature of Republican Governor Brian Sandoval for the largest tax hike in the history of Nevada. Moreover, while the Democrats are predictable in being pro-taxes and pro-tax hikes, they at least are honest and earnest in believing that raising taxes is good. But the GOP, the party of fiscal conservatism, knows better. That's why we hold the Nevada GOP fully responsible for the Nevada stadium tax and all other tax increases that even one single Republican legislator voted in favor of, and that bear Governor Sandoval's signature.

We are also paying attention when the Arizona GOP got the entire LP slate kicked off the ballot (Lines v. McCormick). All these reasons are exactly why I want to give a major shoutout to our CD4 candidate, Steve Brown. Had Steve Brown and the other 3rd party/no-party candidates not run in that district and ground down the Republican's gerrymandered lead, Danny "$17 Million Judgement" Tarkanian would certainly have been elected to the United States Congress. Thank God he didn't get it.

(In light of his wife's interesting comments last night, I'd like to direct readers to the following headlines: Congressional candidate Danny Tarkanian accused of illegal activity in 1990s, Indy Fact Check: Did Danny Tarkanian Take $700,000 from a children's charity?, Tarkanian borrowed from parents' life insurance - without their knowing - to pay off his mortgage, Danny Tarkanian acknowledges bankruptcy truth.)

Everybody was hoping Larry Sharpe would have a stronger showing in his New York gubernatorial campaign, but he still nabbed an important win for the LP: automatic ballot access in 2020. That's important!

Governor Gary Johnson won 15.4% of the vote, making him the holder of two records in historic vote totals for the Libertarian Party. Having him on the ballot also helped other candidates down-ticket get vote totals from the 20s to the high 30s.

I'm really sad that State Senator Laura Ebke lost her race in Nebraska. She's a fine human being and I doubt this is the end of her career in public office. In happier news, we have a legislative friend in Justin Fecteau, who was narrowly elected to Maine's House of Representatives for District 86. Fecteau ran on the Ron Paul strategy and was elected as a Republican, but openly presents himself as a libertarian (which I personally vouch that he is). Fecteau is a school teacher who prioritizes high quality education, protecting cannabis legalization from nanny-staters, and keeping taxes low to make Maine friendlier for businesses and tourism. Best of all, this libertarian was endorsed by Young Americans for Liberty.

According to this morning's press release from LP National, a number of Libertarians were elected to mayorships, city councils, and school boards. These local offices are extremely important! For example, a city mayor can use his executive power to force the city police to focus on violent crimes and not punish victimless crimes. School boards can introduce Ludwig von Mises, Henry Hazlitt, and anything by the Foundation for Economic Education into the school curriculum.

Most importantly, the states where we earned automatic ballot access are the states where we got an early advantage. That means Massachusetts, New York, Oklahoma, Wyoming, and the District of Columbia are where the Libertarian Party should fight hardest and longest. These are the states where we can do better after learning what we learned this year and in 2016. Especially in Wyoming; Bethany Baldes only lost her race for State Representative (District 55) by 53 votes! That's way too close for us to ignore! Realistically, she could get it if she runs again. If there's any state where the LP can flip the legislature, enact sweeping libertarian reforms, and create the Free State that we want, Wyoming is the place.

Back here in Nevada, the Democrats will be in charge for two years. C'est la vie. If Americans are strong enough to make it through the Civil War, two world wars, and the Great Depression, then we're strong enough to make it through 2 years of Democrat rule. Energy prices will go up because the Dems got their way, but we fought against them tooth and nail on the energy question. Other than that, the Nevada Democrats still have to work really hard to out-do the GOP on historic tax raises. In Las Vegas, Robert "Vegas Don" Strawder has committed to staying with the LP, and he plans to live our creed of charity by choice through starting a nonprofit to intervene in the lives of at-risk youth.

2018 voter turnout for the LP in Mississippi was 15% higher than it was in 2016. Good on them! We in Nevada are eager to learn from them. In Tennessee, an exploratory committee has already been formed to run the LP powerhouse Tom "Liberty Claus" Arnold for U.S. Senate. We have presidential candidates in Bill Weld the ex-governor Massachusetts, and Adam Kokesh the peaceful radical.

2018 showed us exactly where we fell short. We acknowledge that. We will improve. Nevada will be our battleground, but we also look forward to seeing the LP take off in the states where it currently stands the strongest: Massachusetts, New York, Oklahoma, Wyoming, D.C., plus Tennessee and Mississippi. If you're running for office, or representing a campaign exploratory committee, I'd love for you and your team to reach out and talk with us so we can learn from each other's experiences in the field.

Drop me a line at [email protected]