The Libertarian Party of Nevada is Part of Team Solar 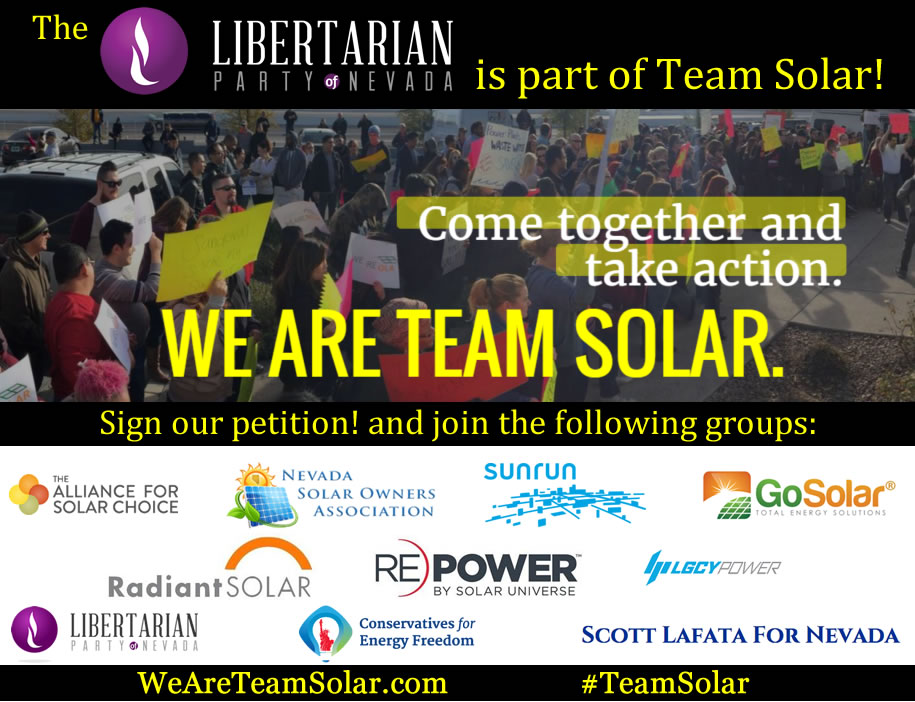 The Libertarian Party of Nevada supports a market based solution to energy production, diversification and innovation. The Libertarian Party of Nevada is part of Team Solar and we join the fight with other groups such as Sunrun, Go Solar, Nevada Solar Owners Association, REPOWER by Solar Universe, Radiant Solar, Scott Lafata for Nevada, Conservatives for Energy Freedom and The Alliance for Solar Choice.

We encourage our members to sign our petition located on www.weareteamsolar.com. Then please share it on social media with your friends.

Here is a press release that went out today:

The petition demands that Governor Sandoval take action, stating: "By law, the Commission was required to 'Encourage private investment in renewable energy resources; Stimulate the economic growth of this State; Enhance the continued diversification of the energy resources used in this State' through net metering. Commissioners David Noble, Paul Thomsen and Alaina Burtenshaw have failed to do this, and it is your right and duty in serving the people of Nevada to remove these three Commissioners from office immediately."

Just before Christmas, the Governor-appointed Commissioners voted to drastically increase fees for solar customers and slash the rates for the power they produce. They made this decision retroactive, penalizing 17,000 Nevadans who were encouraged to go solar by Governor Sandoval, the legislature, and the utility.

"There is no doubt in my mind that the Commission ruling is NV Energy's attempt to kill competition and keep Nevada consumers shackled to government-created monopolies," said Debbie Dooley, founding member of the Tea Party and Conservatives for Energy Freedom, and a backer of the petition. "I strongly urge Governor Sandoval to replace all three Commissioners with people who will stand up to monopolies and reverse the devastating anti-solar ruling."

Already, six solar companies have announced that the decision forced them to cease operations in Nevada or layoff most of their staff. Silicon Valley investors are also signaling that this decision could inhibit future investments in the state.

It is widely reported that two of Governor Sandoval's top political advisors are NV Energy lobbyists. In recent interviews, Governor Sandoval says that in terms of clean energy development, "Nevada means business." But in response to public pleas to take a leadership role to protect solar energy in Nevada, Governor Sandoval argued that "it would be improper and perhaps illegal for me to interfere with [the Commission's] process."

According to Nevada law, "The Governor shall have the power to remove any Commissioner for inefficiency, neglect of duty or malfeasance in office." In making this decision, the Commissioners have neglected their duty under Nevada law and should be removed.

Please visit this link for the original press release:
http://www.prnewswire.com/news-releases/national-conservative-group-local-solar-installers-back-new-petition-calling-on-governor-sandoval-to-remove-anti-solar-commission-300209101.html