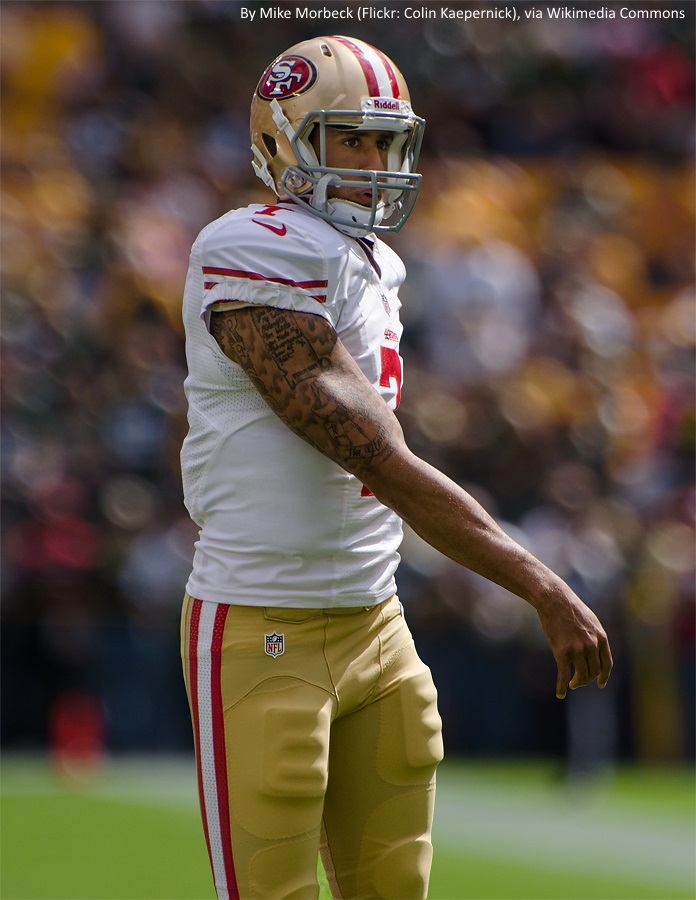 Spend any time on the internet or watching the news this weekend, and you’re sure to have come across the story of San Francisco 49ers quarterback (and UNR alumnus) Colin Kaepernick refusing to stand while the national anthem played prior to a pre-season game on Friday. The decision has generated the expected outrage, but what exactly is causing the outrage?

While Title 36, Section 301 of the US Code outlines protocols for behavior during performances of the national anthem, it does not include any type of sanctions for those who do not comply.

Quite possibly, that is because there would be a very strong First Amendment argument against it. Expressive conduct or symbolic speech is generally protected under the First Amendment. Additionally, the NFL also does not require players to stand during the performance, either (although they do encourage it).

Let’s imagine there were a requirement (with sanctions) to stand during the national anthem. Would it still be a measure of respect to stand? After all, if an action is taken out of fear of reprisal and not as a voluntary desire, can you assign the same intent to it? Fear of punishment is not really on par with a display of reverence or respect, spontaneous or otherwise. Did Mr. Kaepernick interfere with anyone else’s ability to show their respect? Was he disruptive, obscene, or profane? No. He merely exercised his right to decide for himself whether he wanted to stand during the national anthem.

Isn’t the freedom to decide that for oneself what we celebrate as our culture? Is not the right to free speech (or in this case, expression) so cherished that it is part of the First Amendment to the Constitution? If one is not free to express an opinion that causes no harm to others (please, no references to yelling “Fire!” in a crowded theater), then how free are we, exactly? His reasons for doing so are irrelevant; after all, the outrage is stemming from his refusal to stand, not from his stated reason, and I am not arguing the merits of his opinion, only of his right to express it. Whether or not you agree with his rationale, should you not support his right to protest? To be clear, in addition to supporting Kaepernick’s right to abstain from standing, I also support the right to express your displeasure with his choice – in an equally protected way.

The same is true with someone who walks on or burns a flag, or who defaces political signs/paraphernalia. As long as the flag or political sign is his property, and not that of someone else, it is a perfectly acceptable form of expression, and is a protected form of speech. Taking a candidate's yard sign from someone's lawn or stealing their flag to make your point is not included in this protection. I know that this type of protest particularly incenses current and former members of the military. However, if you aren’t allowed to engage in this right, is it really a right that the military has fought for? What is a right if it can’t be exercised? Rights don’t need to be protected if they go along with the status quo. These types of protests hurt nothing other than the sensibilities of those who are offended by them. There is no right not be offended anywhere in the Bill of Rights, but freedom of speech is at the top of the list.

So where does the anger and outrage come from? Do we get this outraged every time someone holds an opinion different than our own? Are opinions that we don’t hold any less valid merely because they are not the same? What is at the root of the emotion? Anger is considered to a surface emotion; underneath hurt, pain, fear, frustration, resentment, disappointment, or loss is what truly drives the anger. So if displays such as this anger you, ask yourself why. It’s said that he who angers you controls you. I personally don’t like to be controlled.


If you want to learn more about the Libertarian Party, why don’t you join us at an event? Great conversation is always an ingredient!