"This is hip hop meets politics," Strawder says with a smile, "and I'm all about bringing people together while we're fighting the system."

The system Strawder is talking about is the institution of omnipotent government that over-reaches beyond its boundaries, criminalizes normal behavior, and causes inter-generational poverty and legal problems for families across America.  This is the case with Strawder, whose youth ended when his family was destroyed by the War on Drugs.  After navigating the gang life, Strawder was able to get some job training for CDL driving and turned his life around.

"Getting that training changed the whole game for me," Strawder remembers.  "I was in a bad neighborhood in a bad situation, but I wasn't a bad person. I was just trying to support my family.  Job training gave me that chance."  None of that existed in the scene Strawder was caught up in before, and that scene was all that the young man knew.

Once Strawder got stabilized in life, he began pursuing his passion: music.  It was as a young and inexperienced hip hop artist that Strawder met Shock G, who became a mentor to him.  After years in the hip hop scene between Las Vegas and Los Angeles, Strawder couldn't ignore the pain he saw around him any longer.  Fathers, sons, and grandsons were getting sent to prison for 'offenses' like drug possession and sale (not a crime according to Libertarians, since no victim = no crime). He kept seeing inter-generational poverty with no upward mobility, and police departments from coast to coast breaking records for incidents where police shot a civilian.

"We can't take this anymore," Strawder declares.  "The two parties have been telling us the same things for 40 years, and no change.  We can't wait any longer.  The people have to stand up and fight the system."

Strawder's most important issues are ending the War on Drugs, reducing prison recidivism, lower taxes, and working with county and state agencies for education reform. "I think Strawder has the right path," Shock G said.  "He's been through and seen the darkest of dark and the most beautiful of light, and he knows where it all fits in.  He's representing all of us." 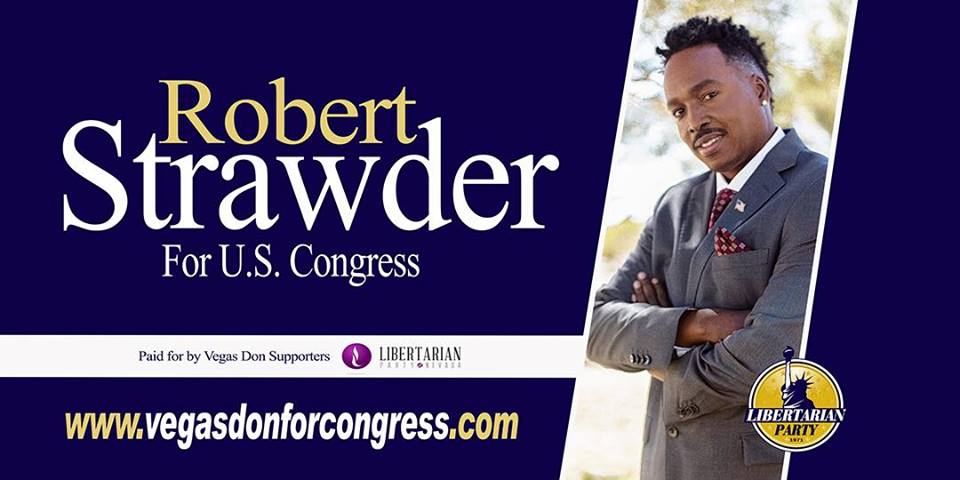 Press and media have full permission to re-use this article as long as there's a link back to this page.

Be sure to visit Robert Strawder's campaign website and Facebook page. You can help out by sharing the Shock G endorsement video, using the hashtags #VegasDonforCongress and #VoteLibertarian, by volunteering, and by donating to help his campaign. Any amount helps, no matter how much or how little.