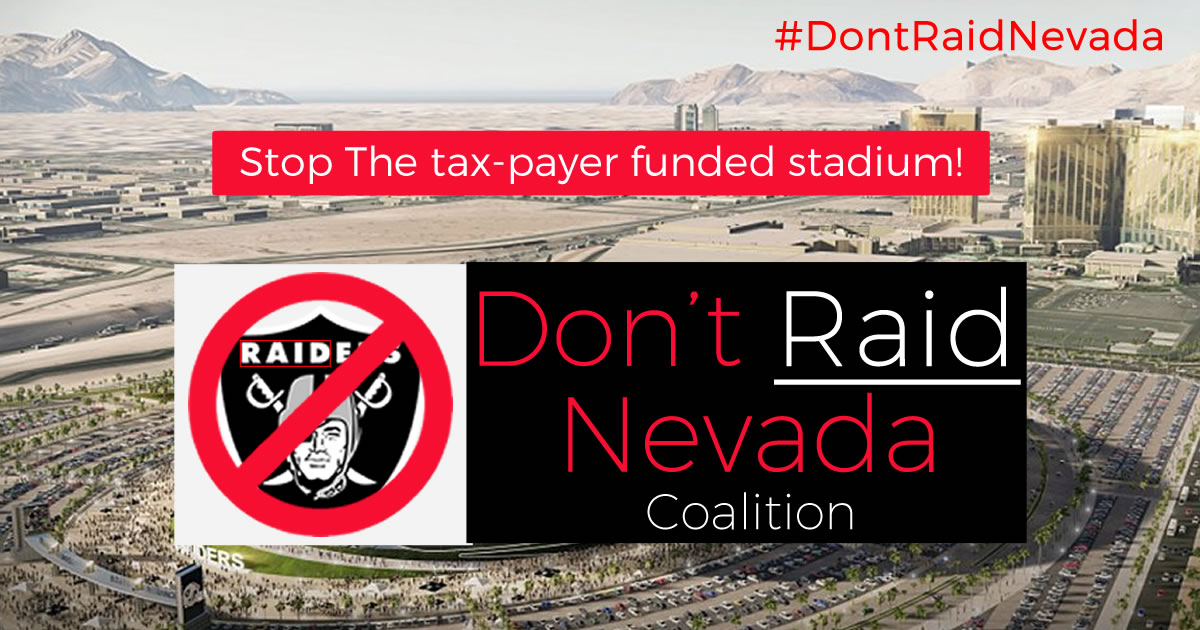 Don’t Raid Nevada Coalition was established to bring awareness about the negative aspects of the taxpayer funded stadium and encourage legislators to vote no on the stadium.

Don’t Raid Nevada Coalition was formed to bring awareness to the negative impact of the taxpayer funded stadium on the residents of Las Vegas, Nevada. Elected officials are currently debating whether to spend public funds on a new Las Vegas stadium in the hopes of attracting the NFL’s Raiders to relocate from Oakland. Taxpayers would be responsible for subsidizing Billionaires for a minimum of $750 Million dollars.

The goals of Don’t Raid Nevada Coalition are listed on the website www.DontRaidNevada.com. Some of the main goals and key points are as are as follows:

The Libertarian Party of Nevada was credited as a major force in disrupting the $200 Million taxpayer funded soccer stadium in Las Vegas almost 2 years ago, view this blog post. “Ever since the inception of this project we (LPNevada) have been receiving phone calls from individuals and organizations who oppose the taxpayer funded stadium,” said LPNevada Chairman Brett H. Pojunis. “Besides the fact we are subsidizing Billionaires, our biggest issue is that the public is being misled by the $750 Million price tag. The Stadium will likely cost in excess of $1.65 Billion based solely on the $50 Million projected in annual new tax revenues multiplied by 33 years before the sunset.”

We are asking everyone who is against this to please sign up for the following:

Please make sure to start sharing our posts and the website with your friends and family so you can be an informed voter.

The Libertarian Party is the third-largest and the fastest growing political party in the America. The Libertarian Party offers a viable alternative to the long-standing 2 party system in America. Libertarians believe the answer to America's political problems are embracing a free-market economy and the abundance and prosperity it brings; a dedication to personal freedom and civil liberties that marks this country above all others; and a foreign policy of free trade, non-intervention, and peace as intended by America's founders.