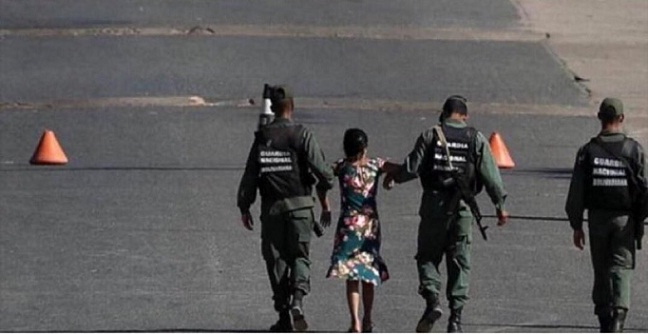 There's been a lot of online discussion among some of the more active members of the Libertarian Party's Libertarian Socialist Caucus about Venezuela. Unfortunately, most of these talking points are completely untrue. Several intellectually honest LSC members have, to their credit, contacted me with their questions, knowing I've worked closely with members of the Venezuelan Opposition for over two years.

The long story short of the best libertarian position on Venezuela is that there should be no US military adventures in Latin America, but Maduro is also a brutal dictator and the Venezuelan people have every right to get rid of him.

First, let's start off by establishing that Kevin Zeese, the leftist activist from Popular Resistance who invaded the Venezuelan embassy in Washington DC for Maduro, is completely incorrect about Juan Guaido. Neither Guaido nor his party are 'right-wing' as Zeese said. They're actually social democrats -- much closer to the politics of Bernie Sanders and the DSA than Nicolas Maduro or the United Socialist Party will ever be. Maduro's people are Stalinists while the Opposition are mostly left-wing. For example, Guaido's party, Voluntad Popular, are recognized members of the Socialist International, and the International recognized Guaido as the legitimate constitutional President of Venezuela. Neither is Voluntad Popular a 'tiny party'-- they lost the 2013 presidential election by only 1% and are currently the majority in the National Assembly. Calling them right-wingers is just plain incorrect; they're socialists, they're just not on the side of the criminals you've been told you support.

Second, while you're correct to oppose US military intervention in Venezuela, I can't help but notice so many of you being silent about the ongoing military invasion of Venezuela by Cuban, Russian, and Chinese troops. The world is a giant statist Game of Thrones and it's absolutely silly to believe the US is the only shady government with shady plans for Venezuela. If you believe anything that John Perkins wrote in Confessions of an Economic Hitman, like I do, then you also have to be open to the real (and confirmed) possibility that Cuban, Russian, and Chinese economic hitmen are trying to get Venezuela's oil, not just US oil companies. That's why their soldiers are in Venezuela: not for 'socialist solidarity' but to protect their big cash cow!

Example 1: “Venezuela’s state-run oil firm PDVSA has bought nearly $440 million worth of foreign crude and shipped it directly to Cuba on friendly credit terms - and often at a loss, according to internal company documents reviewed by Reuters. The shipments are the first documented instances of the OPEC nation buying crude to supply regional allies instead of selling them oil from its own vast reserves.” [Source: Reuters]

Example 2: “Russia has been one of Venezuela’s closest allies since 2006, when President Hugo Chavez... signed a $2.9 billion arms deal in exchange for Russian fighter aircraft. The relationship allowed Russia access to Venezuelan oil assets at below-market prices. [Source: Council on Foreign Relations]

Example 3: “Over the past decade, Beijing has lent Caracas some $70 billion, mostly for development projects, in exchange for future oil shipments. Analysts estimate the Maduro regime owes China about $13 billion. China is behind only the United States and India as an importer of Venezuelan crude. However, President Xi Jinping has thus far refused to restructure Venezuela’s outstanding loans.” [Source: CFR, same]

Example 4: “Loans from China to Venezuela reached at least $50 billion by 2017, with some estimating the number to have been as high as $60 billion. (The uncertainty regarding the figure is the result of opaque loans, split into payments of $2 billion and $5 billion each.) [Source: Sup China]

Follow the money, socialists! Most of you have been fooled by the wealthy Boligarchs who only pay lip service to Karl Marx. Stop coming to their defense. 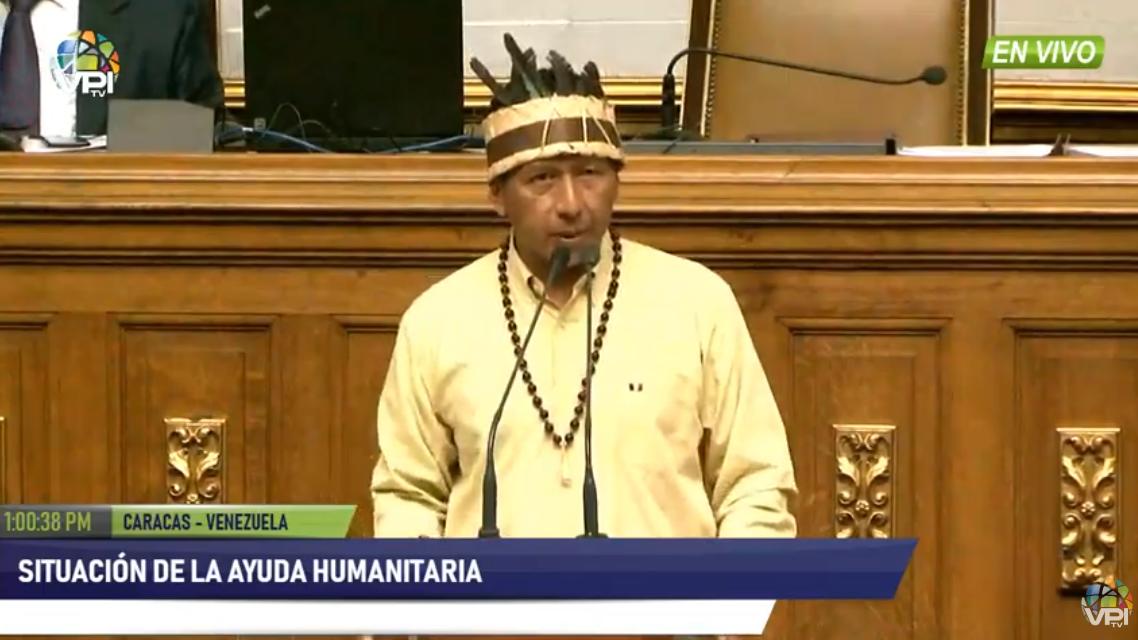 Assemblyman Romel Guzamana, leader of the Pemon Nation,
denounces the massacre of his people by the Maduro regime.
Image from Alberto News.

Third, it seems as if most of the LSC is ignoring the recent UN human rights report that blasts the Maduro regime for rampant human rights violations, including widespread torture and thousands of extrajudicial executions. This is telling given that the report was prepared under Michelle Bachelet, the socialist former president of Chile, who has been extremely hesitant to criticize the Maduro regime. That all changed after Bachelet and her team  personally interviewed hundreds of torture victims. Does that socialist leader's word not count? (For those who don't believe the Bolivarian Revolution is an Orwellian torture machine, enjoy this video of Sergeant José Tomás Ortega of the Bolivarian National Guard's Cagua, Aragua garrison torturing civilian political prisoners.)

Fourth, socialists claim to fight for indigenous rights, yet I haven't heard one peep from American socialists about the Indian War that's been happening to Venezuela's indigenous people. Yes, the Indian Wars are a thing again thanks to the Maduro regime. In February, after the Pemon Nation had recognized Guaido as Interim President, the regime emptied two prisons, armed the convicts and put them in uniform, and unleashed them on the Pemon people. The result from that weekend was 25 Pemons murdered, 80 completely missing, and another 1,000 displaced and having fled across the border to Brazil.

American chavistas can cry all they want about the economic sanctions (which didn't hit PDVSA until the end of April 2019), but invading indigenous lands and shooting up the Natives has nothing to do with economic sanctions. That was a crime against the Natives for their politics, plain and simple. Even the ancap Murray Rothbard praised and defended the Zapatista indigenous rebels in Mexico, but too many American socialists either completely ignore or try to justify the massacre of the Venezuelan Natives.

And finally, one of the left's favorite talking points is that the US government did the 2002 coup. It's a fun conspiracy theory, but here's the thing: there's ample evidence of US government crimes in Iraq, Afghanistan, and at home thanks to sources like Wikileaks. There's even evidence that the 1953 coup in Iran was orchestrated by the CIA. That said, there's no evidence that the CIA or the US government had anything to do with the events of April 2002. (The fact that Chavez said it in The Revolution Will Not Be Televised does not equal evidence.)

What actually happened is that, while the Opposition leaders did plan a march to Miraflores to demand Chavez's resignation, there is ample video evidence and eyewitness testimonies that the marchers were allowed to get to Miraflores, where Chavez's armed civilian paramilitary supporters waited for them. When the shooting occurred (the chavistas shot first), the army stood back and allowed the chavista civilians to shoot at Opposition protesters. Then, in 'response' to the mayhem, Chavez activated Plan Avila. The last time Plan Avila had been activated was in response to the Caracazo riots of 1989, and hundreds of civilians died from the government's heavy handed response.

The generals refused to implement Plan Avila and they strong armed Chavez to step down, albeit without having him sign a formal resignation. The generals' intent was to allow the National Assembly (which was then under a chavista majority) to use the constitutional process to choose an Interim President and convene presidential elections. That was when another cabal came from left field with Pedro Carmona, who declared himself President and dissolved the National Assembly. The generals never gave anyone their blessing to perform a coup d'etat. The way they saw it, Chavez was under arrest, not overthrown. So in response to Carmona's 24-hour dictatorship, General Raul Baduel decided to reinstall Chavez to bring back order.

(The best and most thorough journalistic investigation of the 2002 coup that I've seen yet is from Caracas Chronicles.)

Now, back to the subject of General Baduel, who restored Chavez to power in 2002. Where is he today? He's languishing in a military prison as a political prisoner for criticizing the Maduro regime. Libertarian socialists, this is the Bolivarian Revolution that so many of you vocally support. You can't split atoms like the way many of you have been til now. If you support the Bolivarian Revolution and believe that Maduro's presidency must be upheld, then you also support the mass imprisonment, the torture, the thousands of extrajudicial executions, and the war on the indigenous population that have been necessary to keep him in power. The evidence of the regime's crimes is undeniable and overwhelming. and so many of you ignore it because you have a need to make Venezuela's suffering about Donald Trump.

Meanwhile, of all the critics of people like me who support the right of the Venezuelan masses to free themselves, not one of these Libertarian Party members in the LSC has even bothered to ask the Venezuelan Libertarians what they think or what their goals are. Folks, you're better than this. I'm ready to talk when you are.

Note: This post originally included a typo saying "the side you criminals" instead of "the side of the criminals you've been told...". I apologize; that was a typo and the intent was to call the Maduro regime criminals, NOT the LSC-LP