The issue of privately issued vaccine mandates has been a divisive one among libertarians. The pure libertarian position is that private entities should have the right to set their own terms, and to choose who they hire and serve - even if their decisions are unsavory.  This is the answer to the “bake the cake” argument, and is ultimately correct.

The issue of privately issued vaccine mandates has been a divisive one among libertarians. The pure libertarian position is that private entities should have the right to set their own terms, and to choose who they hire and serve - even if their decisions are unsavory.  This is the answer to the “bake the cake” argument, and is ultimately correct.

However, for many in the movement it has been impossible to ignore the reality that these “private” vaccine mandates are often not wholly so. Here in Nevada, we have seen our own state government explicitly tie business reopening restrictions to employee vaccination status (in gaming for instance). Many industries are tightly regulated and cannot operate without countless permission slips and approvals from the government.  In this environment, business owners are hesitant to openly defy their local petty tyrants - who often have substantial leeway to upend their operations and impose costs upon them. The largest corporations are deeply intertwined with the government, and we have no way of knowing what conversations are taking place behind closed doors. None of these decisions are being made in a vacuum, and instances of “privately issued” vaccine mandates are broadly not a result of organic market demand.

From the very beginning, this pandemic has been the subject of a relentless propaganda campaign. The popular twilight zone meme below makes a valid point - it is astronomically unlikely that this virus would net this level of response from society, had governments not behaved the way that they did (tyrannically and opportunistically). 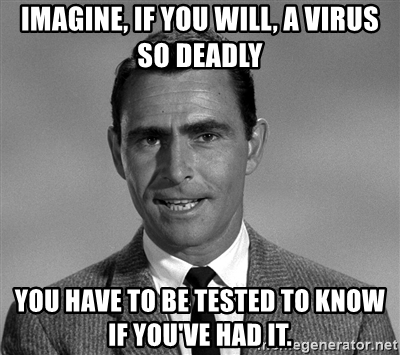 Bureaucratic incentives are different from those that face you and I - the ordinary citizen. We have an incentive to assess our personal risk and weigh that against our other responsibilities and desires.  They have an incentive to “do something, anything” to avoid being a “do-nothing”, and to pass on the costs to others. Afterwards, their most powerful incentive is to justify their actions and hide or shift the blame for any damage caused.

When it comes to the idea of banning vaccine passports, many if not most libertarians would oppose the policy on principle.  Most of us would likely support the New Hampshire model (which banned their use for the government and it’s contractors) over the Florida model (which banned their use completely). Those who disagree usually take the position that the situation is too dire for half-measures, and we must use any means necessary to prevent this incursion on our basic right to determine what enters our bodies.

It’s important for libertarians to have these conversations, and to throw our weight behind policies that are more consistent with our principles over those that are less consistent. We understand that bad or evil ideas shouldn’t necessarily be illegal. We can believe something should be legal, while also advocating against it on moral grounds and refusing to participate. There is always a role for principled opposition, and always a need for consistent voices that apply moral principles evenly regardless of circumstances.

However; let’s not be blind to who our allies are or which of the evils is lesser.

The executive order on mass vaccination from the Biden administration explicitly sought to weaponize private enterprise against informed consent, medical freedom, and bodily autonomy.  Although the “anti-vaccine-passport” restrictions in Florida and other states also infringe on the liberty of business owners, those efforts cannot be divorced from their broader context. The local and state level politicians promoting these countermeasures are the political resistance. While the passport bans may not be optimal, they are what is standing between the mandates and the rest of us (in certain localities). Any legal challenges could take years, and in the interim - business owners are faced with the reality on the ground.

Furthermore, while all incursions on personal liberty are bad, some are worse than others. The implementation of a nationwide vaccine passport system would be an evil that cannot be reversed. We cannot allow the government to determine whether peaceful individuals have the ability to work, shop, recreate, or otherwise participate in society based on their level of compliance. It is beyond naïve to assume that if this platform were to exist, it would not instantly become a tool for repression of political opposition. That is the true function of such a system.

While we may philosophically disagree with an indiscriminate banning of vaccine passports, it does not serve us to rail loudly against them. We have no obligation to carry water for the authoritarians who wish to trample upon us. There is no need to weaken and undermine our message by qualifying our opposition. Ultimately, to advocate for privately issued vaccine mandates or to decry those who ban them as tyrants is tone-deaf to the current political reality.

I do not advocate for compromising our beliefs. We should still make the positive case for the government to have no involvement on this issue whatsoever. We should support those policies which seek to nullify the federal incursions on liberty and protect the rights of individuals and businesses to make their own decisions.  But we should not make the perfect into the enemy of the good. If our local politicians are brave enough to stand against a federal pronouncement or to take action to protect their constituents from OSHA penalties - I say that we do everything we can to support them, without reservation, and as loudly and vehemently as we are able.

This article is the personal opinion of the author.