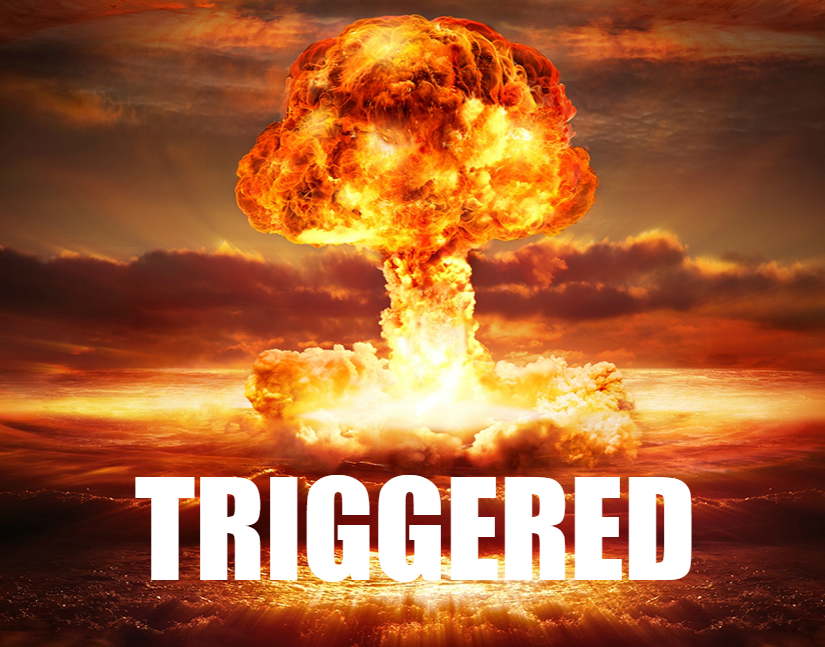 I'll freely admit to creeping on Lauren Southern's twitter profile on a weekly basis.  She shared something today that's important and an item for clarification: the concept of 'clovergender.'  (By the way, Lauren, I must confess: your beauty, your wit, your take-no-prisoners style, and your passionate hold on your principles make you ridiculously attractive in my eyes.  I'm madly in love with you [some days], but I've gotta admit that trolling liberals and telling them you identify as an attack helicopter is a total dick move.  It's not nice to knowingly mess with the mentally ill, period.  You're a role model for millions and you're better than that.)

In the last 2 days a definition of "Clovergender" has gone viral, with a number of social media accounts and amateur blogs nobody cares about going absolutely bananas over this.  Clovergender or 'kindergender' supposedly applies to adults who never mentally develop beyond the age of 13 and believe they're permanent children or preteens trapped in an adult's body.  Hence, they have romantic feelings or sexual attraction to kids and preteens.  Sounds like a major red flag!

While thousands of people are taking this seriously and being loud about it, those people need to turn down their blind devotion to emotion-based ideology and just take a chill pill.  In Southern's own words, "Just so y'all don't die... pretty sure someone made this gender as a meme."  IT'S A JOKE. Clovergender is literally not a thing.  There certainly are adults who behave like children, and often have times where they feel like they can't help but behave that way, but that's for Dr. Leon F. Seltzer to explain elsewhere.

Of all the people retweeting, sharing, commenting, and throwing a right-wing temper-tantrum over 'clovergender' persons, I'm really surprised more people didn't turn to their favorite form of research for in-depth political discussions: a three-second Google search and a whole two second glance at the top results.

I'm incredibly glad Southern shared this meme as a good joke.  I have a confession to make: it wasn't funny.  I'm not trying to slam Lauren; the quality of the joke itself was good.  The environment is the problem.  I couldn't laugh because I honest-to-goodness had no idea whether it was a joke or not!  I couldn't tell if Lauren was just being funny, or if some mentally unbalanced ideologue with serious daddy issues and a PhD is getting ready to create yet another Victims Studies university department.

Neoliberals (not the actual honest leftists like democratic socialists and Marxists, but your prototype pseudo-intellectual coffee-shop Hillary supporters) have created an environment where narratives of victimhood bash the rest of society into submission with a fringe group's agenda.  To make it worse, this environment is solidified by the equally emotional over-reactions of right-wingers and other obnoxious people who use words like 'cuck' and 'beta' and other lingo that sounds like it was lifted from the latest school shooter's manifesto.

I realized my own fear of being labeled or branded a bigot, or even worse in my book, to have my masculinity and sexuality attacked, if I expressed shock or concern at this.  In my experience in activism, the anti-capitalist capitalists in the neoliberal crowd are way more likely to be self-righteous and moralistic, and to attack me for being a 'bigot.'  But right-wingers and alt-right militants (they all remind me of Kylo Ren) are more likely to attack my masculinity and sexuality, and for some reason, that's just so much more wicked and spiteful (and I think they know it). 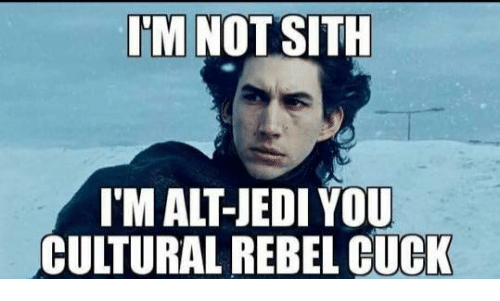 Therefore, I choose to reaffirm my pledge to be respectful, but never to remain silent to try to please anyone and instead remain true to my core beliefs.  What's true is this: clovergender is not a thing.  I really don't understand the transgender thing, but I do know that in the shadow of publicity seekers like Caitlin Jenner are real people like "Holly" in Santa Cruz who remembers being disturbed and disgusted in the mirror, terribly aware that something was wrong since the age of 3, and was finally happy and at peace many years later after her surgery.  I can't even imagine what it's like to live with a disturbing identity crisis like that!

Whether you believe people really are born with the wrong bodies/organs, or whether you believe that transgender living is a complete mental illness, you can't deny that we're talking about human beings with major problems and decisions weighing over their heads.  Most of them simply try to live their own lives while a few of them like to picket and hope they can force the world to accept them.  (Either way, telling these people who clearly have an array of issues that one 'identifies as an attack helicopter' is just essentially kicking a person while they're already down, and just messed up...)

I think it's grossly unfair that trans people are so often the victims of bigotry and even violence (and often from cisgendered LGBT folks!).  I also think it's grossly unfair that parents with six year old children are for the first time in a position to figure out how to explain why that man with a deep voice is wearing a dress, and why the government says "she" is a woman.  The left gravitates to the extreme of holding up the trans community as heroes and role models who must be revered (South Park's PC Principal is the perfect cultural illustration of the times).  The right gravitates to the other extreme and makes the trans community out to be a bunch of circus freaks and crazy people.  Both sides are wrong.

It's perfectly acceptable to be non-binary in your political position.  It's okay to not be okay with transphobia and trans discrimination.  It's also okay to put your foot down, refuse to build a third bathroom, and ask a trans person to just pick a toilet.   It's also perfectly acceptable to see that identity politics only foster more divisions within American society (Case in point: black ethno-centrism in BLM/the New Black Panthers and white ethno-centrism in the alt-right).  It's also easy to see how sexual predators may use political correctness and sexual politics to prey on children.  If for one instant some neoliberal ideologue tries to make clovergender a real concept, then NAMBLA's members will experience a sudden shift in their gender identity as mature adult males.  No one should have to be afraid to call a wolf in sheep's clothing for what it is.  Not everything's black and white and not everything has a quick fix.

While America has this ridiculously out-of-control shout fest passing for a national dialogue, most trans people in the world are pretty low key and just do their own thing.  Leave them alone.  Let them be.  Don't tread on them.  Writing them all off as crazy or freaks falls under the same logic formula as 'all gun owners are bad because of a few shooters'.  Right-wingers who believe all trans people are crazy but not all gun owners are bad are essentially being logical hypocrites.  They're better than that, and I hope they realize it soon.  I'll love and respect them even more when they do.

While we're on this topic: Republicans, I'm happy to work with you for issues we agree on, but I will never be silent about your hypocrisy, especially with sexual politics.  Republicans, conservatives, and the alt-right spent months beating the dead horse about trans people molesting your daughters in public restrooms, and then they knowingly voted for the man who believes it's okay to just grab a woman's vagina without consent.  Am I the only one who sees the glaring, groping irony here?

Many members of the alt-right lament the long-gone days when a man was allowed to be a he-man.  I too have a little nostalgia for those days, and for role models like John Wayne, masculine and with moral compass. If John Wayne saw Donald Trump arbitrarily grab a woman's private parts, he would have cleaned Trump's clock and laid him out on the deck the way a gentleman used to do when witnessing such piggish behavior.  You'd hear none of this stupidity of 'betas on the weight rack' or the pitiful excuse that passes for masculinity today.

Sexual politics can be complicated.  The Libertarian solution of "don't tread on anyone" is less complicated.  The Duke, John Wayne, once said, "I know those law books mean a lot to you, but not out here. Out here a man settles his own problems."  I wish all the liberals and right-wingers who voted for their respective messiahs would realize that.  The left has an excuse; they believe in salvation by big government.  Right-wingers have no excuse.  They just got lazy and fell in line behind a former Democrat to save them from Hillary.  They passed the buck, and in doing so effectively gave up their principals and their spines. 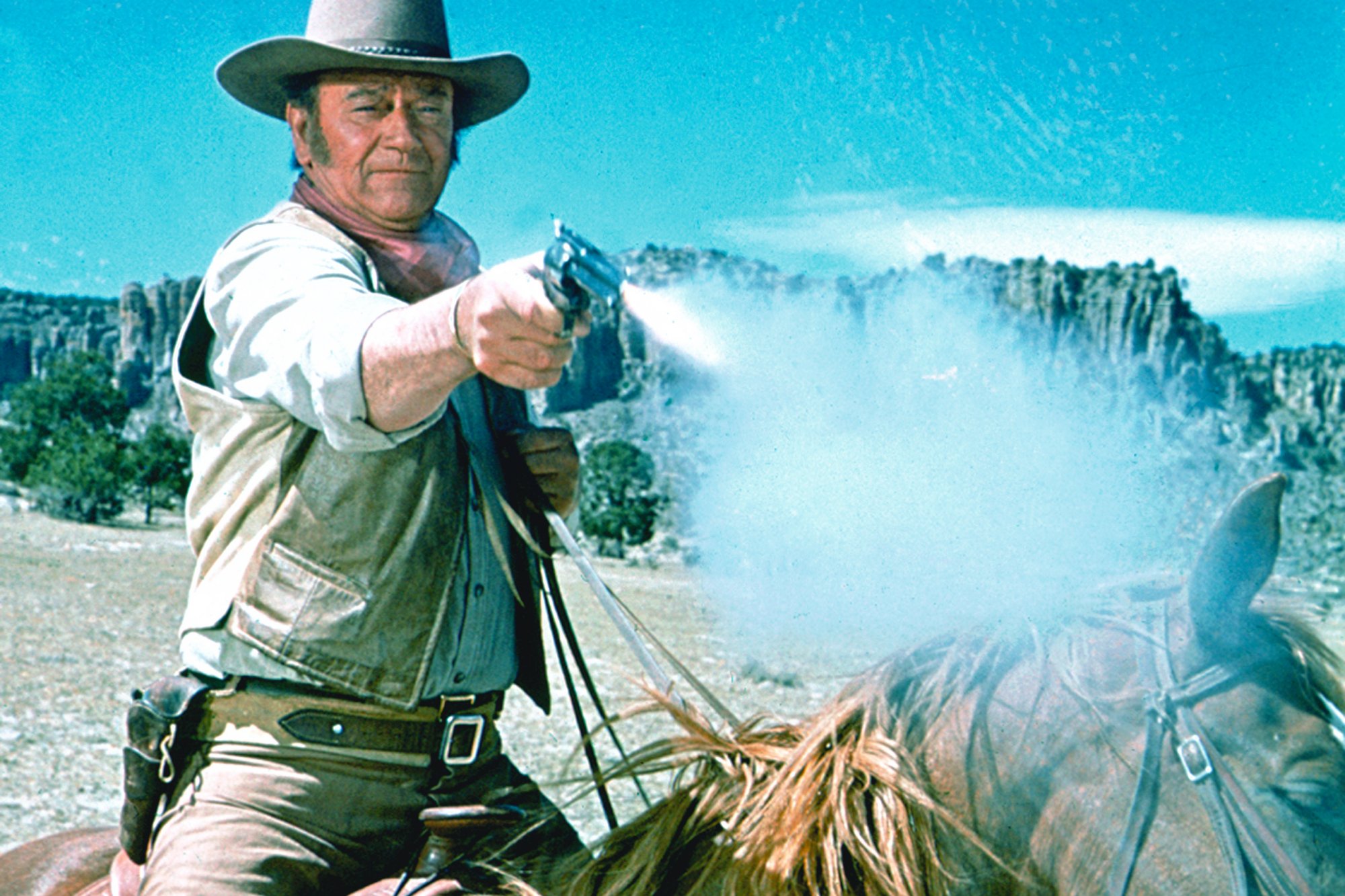