It’s a video the likes of which we have all seen— adrenaline inducing, the kind that makes the palms of your hands sweat.

In the video, you see Maison Des Champs,  a young American man wearing a shirt with “END THE TYRANNY, ‘JUST SAY NO’ TO GOVERNMENT” written on it (he later told us that the back of the shirt said “STOP THE MANDATES”). He is filming himself while climbing the outside of the Aria - a 600ft hotel and casino in the center of the Las Vegas strip.

“The goal of this is to protest the new mandates in Nevada… and around the country. These mandates are a threat to our personal freedom and our civil liberties. And you know, 15 days has slowly turned into 400-something and now is the time to draw the line.”

Maison Des Champs goes on to explain that he had made this daring climb to raise awareness of the upcoming anti-mandate protest on Saturday, August 14th (meeting at 8:00 AM outside of the Planet Hollywood Casino at 3500 S. Las Vegas Blvd).  He was kind enough to join the Libertarian Party of Nevada for a Q&A style interview.  Watch the full video and then read on for our interview with Maison Des Champs!

A: My name is Maison Des Champs and I’m a 22 year old finance student at UNLV. I moved to Las Vegas because I loved the rock climbing in Red Rock and all of the amenities that Vegas has to offer.

Q: Who are your heroes?

A: My heroes are people that I hold very near and dear to me and I think they have really shaped my life, the list is huge. When it comes to climbing Brad Gobright showed me the way and I can never repay that. Other climbers that have inspired me are Brian Mccray and Jorge and Joanne Urioste. At times they were very hated in the climbing community, but they always stuck to their guns and stuck up for what they believed in.

Q: How long have you been climbing and how much experience did you have before attempting this death defying protest for freedom and mental health awareness?

A: I personally have been taking climbing seriously for around 4years. Almost all of my efforts are devoted to it. When I moved to Vegas, I lived in my car for a better part of a year just rock climbing and training. I have climbed a lot of bold routes and I think my climbing style reflects that. Climbing safe is about risk assessment, and at times climbers do choose danger if that’s what makes the climb more enjoyable.

Q: What was the catalyst for your decision to take such bold action knowing it might be the last action you take?

A: As far as climbing the Aria, I wouldn’t say it was death defying. To people that don’t rock climb it looks super dangerous, but for someone with my experience it felt closer to a very large ladder. I have spent a lot of time climbing the many routes on El Capitan, which usually range close to 3,000ft, so the Aria at 600ft didn’t feel all that bad. I had been planning this climb for a long time. When they issued the first mandates I was ready to go and protest however, I thought that it wasn’t worth doing since the mandates would only be around for 15 days. But as many know, we were lied to, 15 days turned into 400. When Governor Sisolak issued the newest mandates I knew we were going backwards and I had to act.”

Q: What do you think are the biggest threats we face from the Covid regime?

A: “My biggest fear at the moment is Public Health tyranny. The problem is that these mandates, although evil, are rooted in compassion. People believe that rights need to be taken away in order to protect. History shows that this is a sign that the government is about to become tyrannical. Hitler famously used public health to gain power, he fumigated factories and imposed mandates. That’s one of the reasons why when he discussed the Aryan race he used words like “pure” and “clean.” Some people get offended when you compare anything to hitler, but history is something that needs to be learned from. Public health and the media have made people  today act brainwashed. People have stopped listening to facts and instead have started actively ignoring flaws in their own arguments. For example either masks and vaccines are great and I don’t pose a threat to you for not wearing one,  or they don’t work that great.”

Q: Who instilled in you such a passion for individual liberties and human rights?

A: I’ve always looked up to Martin Luther King. He was a guy who risked everything for freedom and I think learning from him is something that has inspired me.

Q: Many Americans now consider you a hero, what do you think it takes to be a hero?

A: I don’t like being referred to as a hero, but I’m glad if I inspired anyone to stand up for what they believe in. My intention when I started this protest was not to gain attention for myself. I just want people to show up to the protest.  Sadly I knew beforehand that this was gonna really put me out there and I decided to bite the bullet and do my best to handle it.

Q: What does being American mean to you?

A: To me being an American is about sticking up for freedom and doing what is right. I don’t think that the American government has always been the best it could be but I think overall it has always pointed itself in the right direction.

Q: If someone close to you is struggling with mental health how can you be there to support them through their hard times?

A: I think people who are struggling  with mental health should try to get help. I would like to say that one of the things that has helped me the most is staying busy and finding good communities of people to be surrounded by.

A: Anyone is welcome to come to the protest. People that want to wear masks are encouraged to do so, all are welcome. The biggest thing I ask is that everyone is kind to everyone. If someone says something bad to you either ignore it or respond kindly. The goal is to keep this protest peaceful and respectful. I think that is the best way to get our message across to people. The fact is, many people don’t want to listen and that’s fine. Some people are going to be mean to us but let’s show them who the bigger people are. Please come to the protest and support! Nevada needs all the help it can get!!! Let’s show Governor Sisolak how many Americans want Freedom!!

Help us to support Maison and other fighters for human liberty!  Join us on Saturday, August 14th at 8:00 AM outside the Planet Hollywood Casino at 3500 S. Las Vegas Blvd.  The protest will continue all day. Let’s stand up for individual freedoms and informed consent! END THE MANDATES. 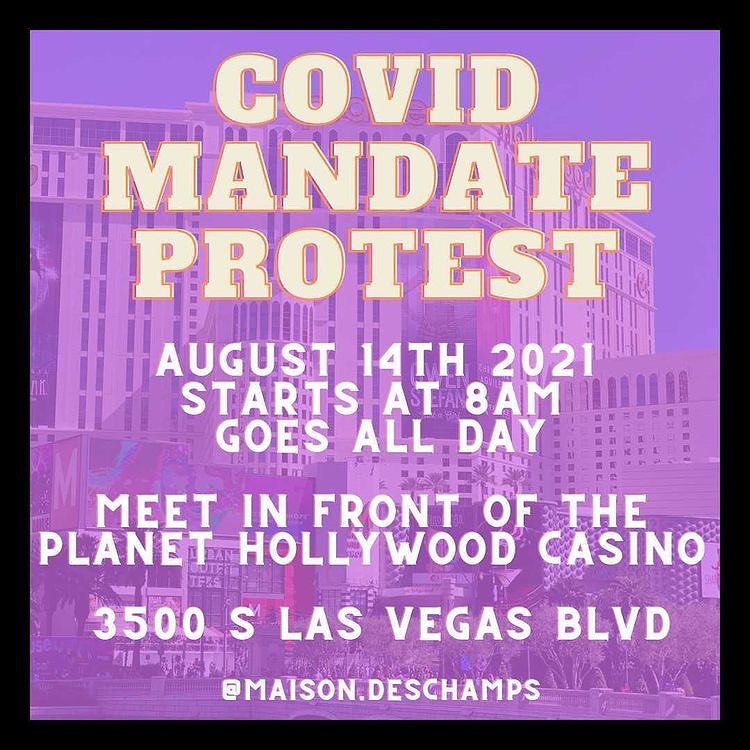