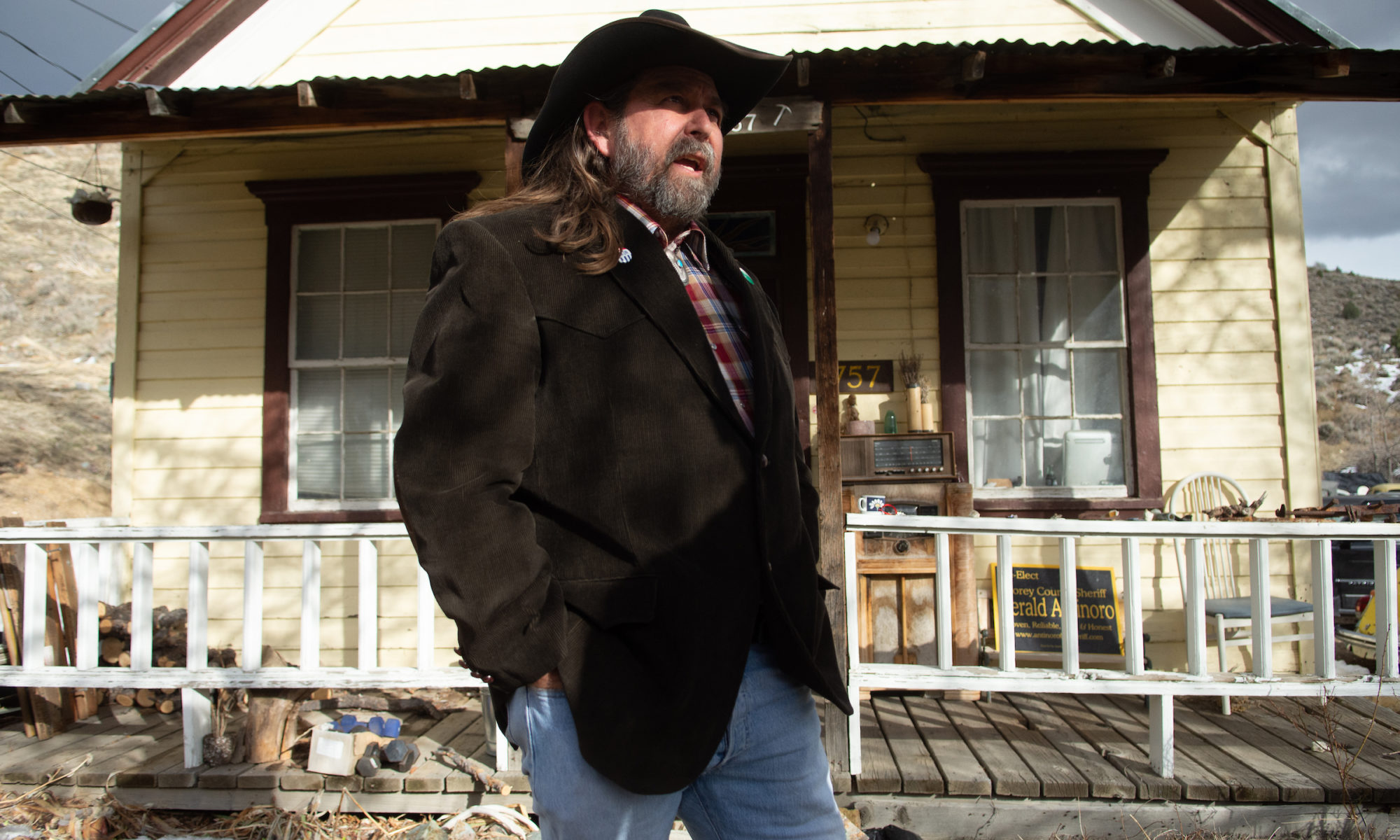 The Libertarian Party has been making the news again! From Las Vegas to Atlanta, people are talking about our party and our activists. First, the State of Nevada recently assaulted the First Amendment when one of our own tried to defend it. An excellent article appeared this week in the Nevada Independent titled "In the county that claims Mark Twain, an irreverent online publisher faces off with a powerful developer over who is a journalist." It talks about LP Nevada's Sam Toll and his refusal as a citizen journalist to reveal his confidential sources to the government, and the government's desire to kill free speech and the right to privacy.

On the same topic, the Las Vegas Tribune says, "There is no such thing as a credentialed or card-carrying journalist. Unlike too many jobs in Nevada and the U.S. there is no government licensing of journalists. If you talk to two people you are a gossip. If you talk to three you are a journalist. But a Carson City judge apparently thinks the Nevada press shield law created the concept of a licensed journalist." In other words, the Nevada state courts officially believe in licenses to practice the First Amendment.

LP Nevada was heavily involved in promoting a rally to end cash bail that was held Monday in front of the Clark County Court. “I think about the people who can’t get out of jail because they don’t have $450,” says activist Brandon Summers. “The inherent inequality in the criminal justice system should not exist, but it does. Those with money and resources can skate by, while those without will suffer. And that needs to change." Many thanks to the Las Vegas Review Journal and the Nevada Current for covering the rally!

Then, of course, there are updates to the circus that's the Libertarian Party 2020 presidential primary races!

More and more grass roots activists within the LP are getting excited over the possibility of libertarian-leaning Republican Congressman Justin Amash running for President on the LP ticket. While Reason has written that Amash isn't ruling out that run, Being Libertarian argues that the LP should nominate an active member instead of Amash.

Also mentioned in the Reason article were presidential contenders Adam Kokesh and John McAfee. Kokesh, although not as well known as Congressman Amash, has valid activism credentials within the LP and in other libertarian circles outside of electoral politics. He began organizing his "Kokesh for Not President" campaign in 2017 before officially launching his presidential campaign. He's also actively promoted the Libertarian brand through his courthouse trolling following his recent Texas arrest for a victimless crime, and through his book bombs to get the FREEDOM manifesto into every voter's mailbox.

Most recently, Kokesh was interviewed on Raquel Okyay Reloaded on Blog Talk Radio. The mixed reactions to Kokesh have been entertaining. Some angry incel blog "exposed" Kokesh as an agent of the Deep State and elaborately connected him to the Boston Bombing "hoax". In contrast, his alma mater, Claremont McKenna College, added Kokesh's name to the list of alumni they brag about to prospective students.

While many party members personally found John McAfee's style and devil-may-care attitude to be refreshing, and found his wife and bodyguard to be wonderful people, we're somewhat apprehensive about his launching another presidential campaign under the Libertarian ticket. His 2016 media outreach was great, but his campaign's delegate groundwork was sorely lacking and it showed at the 2016 national convention in Orlando. Moreover, McAfee promised to his supporters and the rest of the party that he would remain active in the party despite not being nominated. He promptly disappeared from the scene after that convention, started pushing penny stocks for new business projects, and started pushing questionable cryptocurrencies.

Meanwhile, despite everyone's criticisms of Gary Johnson during the 2016 elections, he remained active in the LP, he continued attending fundraising dinners and state conventions, and he ran for US Senate, earning the party double digits in vote percentage. Even Governor Bill Weld fundraised for the LP after 2016 and is now helping us by primarying Trump and weakening the GOP. For these reasons, Mr. McAfee will understand if we're a little skeptical about his motives for running this time around. (For the sake of fairness in this criticism, LP Nevada gave John McAfee his debut in the LP, including a press conference in Las Vegas in January 2016.)

For those interested in the other LP presidential candidates, the Libertarian Vindicator recently published an updated list of declared and speculative candidates for 2020.

Let's move on to see what's happening across the country!

In neighboring Arizona, the Gila County LP is doing well in publishing information on their upcoming meetings. Lack of communication and lack of initiative are what trips up LP recruiting and activism, not the lack of resources. We've proven time and time again we can practically get water from stones when we simply have good communication and good people taking initiative.

On that train of thought, LP Indiana's media outreach efforts are showing. Their upcoming state convention was announced in the Journal Gazette, and we've covered other recent media appearances in past editions of LP in the News.

LP Georgia's state convention was covered by Red and Black. They announced that Chairman Ted Metz was stepping down and planned to work with a nonprofit, though he wasn't ready to give details yet. “All I can tell you is it’s all about civil rights, man,” Metz said. 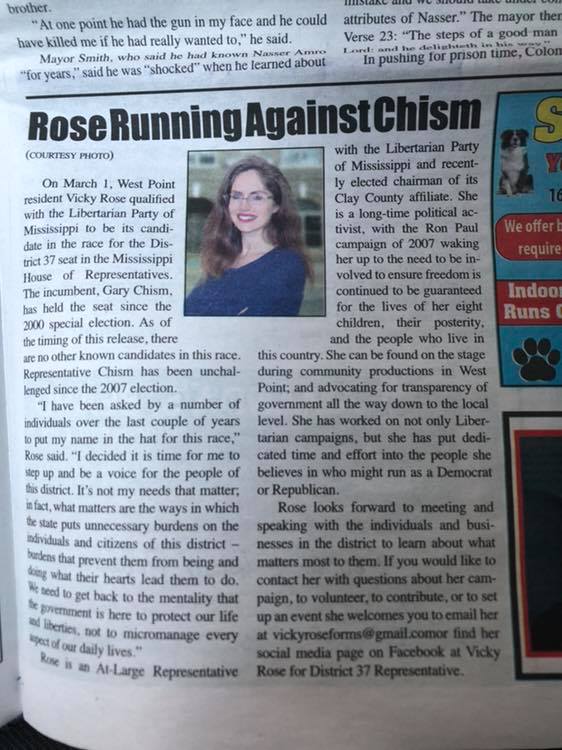 Vicky Rose of LP Mississippi made the paper (The Columbus Packet) regarding her run for State Representative against an incumbent Republican who's used to running unopposed. We're glad he'll finally feel some discomfort for a change. LP Wyoming's Bethany Baldes and her state house run in a similar kind of race has given hope to a lot of activists in this party, and best of luck to Vicky!

The Loraine County LP (an affiliate of LP Ohio) held an immigration forum on March 12 with HOLA, a hispanic outreach organization in northeastern Ohio. They smartly announced it beforehand in a press release published by the Morning Journal.

Michael Lopez of LP Colorado wrote an eloquent article for Westword on how Democrat lawmakers aren't even reading what they pass into law. Lopez argues, "We, as citizens, should demand more of our legislators. We should demand that they know what they are voting on and signing into law. We need to be able to hold our legislators accountable. If they are incapable or unwilling to truly represent us, then they need to be removed from office."

Dr. Kyle Varner, an Internal Medicine specialist and nationally active member of the Libertarian Party, was recently quoted in two articles. One article in Single Care talks about the differences between brand name drugs and generic drugs, and how the FDA screws things up for everybody. The article, from Insider, talks about 13 signs that people should go to the doctor.

There's also news on the international front! In the midst of the national blackout in Venezuela, and the violence the illegal regime has waged against the civilian population, Venezuela's libertarians feel extremely betrayed by the Ron Paul Institute in that their coverage of the Venezuelan crisis furthers Madurista propaganda blaming the US government rather than the criminals in power there who are the walking analogy of the bandit kings from Rothbard's Anatomy of the State.

Of all venues, we were truly (although pleasantly) surprised that National Public Radio mentioned the Libertarian Party of Russia in an article about Russian activists protesting a new internet censorship bill that's sure to turn Putin's Russia into more of a Stalinist state.