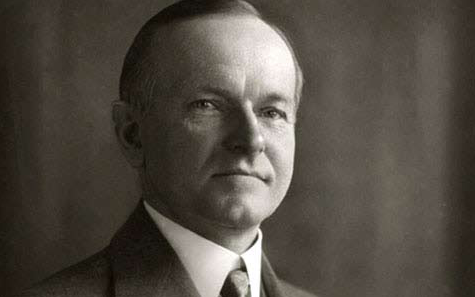 John Calvin Coolidge Jr., our 30th President, 1923-1929, was perhaps America’s most under-rated chief executive.  He was a man of few words, decisive action and a dry sense of humor.

“Silent Cal” was born on the Fourth of July in 1872 in Vermont, the son of a prominent local farmer, general store owner, postmaster and politician.  He was the only president born on Independence Day, although three former presidents died on the Fourth.

His father, John Sr., served as a justice of the peace and Vermont legislator.  His mother and only sibling both died by the time Coolidge was 15, but his father lived past 80.

Coolidge moved to Massachusetts, where he spent his pre-presidential years, when he enrolled at Amherst College.  His early career was spent in the Pioneer Valley on the Connecticut River, apprenticing at a Northampton law firm to avoid the cost of law school.  His political activities began there too.

Unlike today, the Republican Party was the dominant party in Massachusetts politics at that time.  Coolidge started his political career campaigning for Republican William McKinley for president in 1896, and caught the attention of the local Republican committee in the process.  Two years later, he was elected to the Northampton city council, and subsequently two terms as city solicitor (city attorney).

Coolidge also suffered his only electoral defeat in 1904, running for the school board.  The fact he had no children in school worked against him in that race.  He recovered to win a seat in the Massachusetts legislature two years later.

He married a fellow Vermonter, Grace Goodhue.  According to an article by David Greenberg at millercenter.org, “Coolidge first caught her eye one morning when she saw him through the open window of his boardinghouse in Northampton, standing in his underwear and wearing a hat while shaving.  She thought that he looked ridiculous, laughed loud enough for him to notice her, and then turned away.”

Goodhue graduated from the University of Vermont and was a teacher at a school for the deaf in Northampton when this encounter happened.  His marriage proposal a few months later to her was simply, “I’m going to be married to you.”  They married in 1905, and had two boys in the next three years.

A man of few words, even when proposing marriage!

After two terms in the legislature, he decided he wanted to be closer to home and got elected mayor of Northampton, serving two one-year terms before winning a state senate seat in 1912.

That year there was a seismic split in the Republican Party, between the breakaway Bull Moose Party progressives led by former President Theodore Roosevelt and the conservative Republicans backing incumbent President William Taft.  Although Coolidge liked many progressive principles and was especially a strong supporter of racial equality, he remained a Republican and narrowly won the senate race.

His service in Boston led to his victory as Lieutenant Governor of Massachusetts in 1916, providing the western Massachusetts balance to the ticket with Governor Samuel McCall’s Boston-area support base.

When McCall declined to run for another term, Coolidge ran for Governor himself in 1918, winning his narrowest statewide electoral victory.  During his term as governor, he came into national prominence by breaking the Boston police strike.  Some of his decisions were controversial, but “his response to the Boston police strike of 1919 thrust him into the national spotlight and gave him a national reputation as a decisive leader, and a strict enforcer of law and order,” according to Wikipedia.

Coolidge was reelected governor in 1919 after the strike by his largest margin in a statewide race.  His most notable accomplishments in his second term were pushing the legislature to provide $100 bonuses to returning World War I veterans and vetoing a measure to increase legislative pay by 50 percent.

The question of prohibition was also one Coolidge waded into in his last term, vetoing a bill that would have allowed limited alcohol sales in violation of the 18th Amendment to the Constitution.  Said Coolidge, very simply, “Opinions and instructions do not outmatch the Constitution.”

Succinct and following the Constitution.  What a novel concept!

Next week we present the second of our two Coolidge columns.