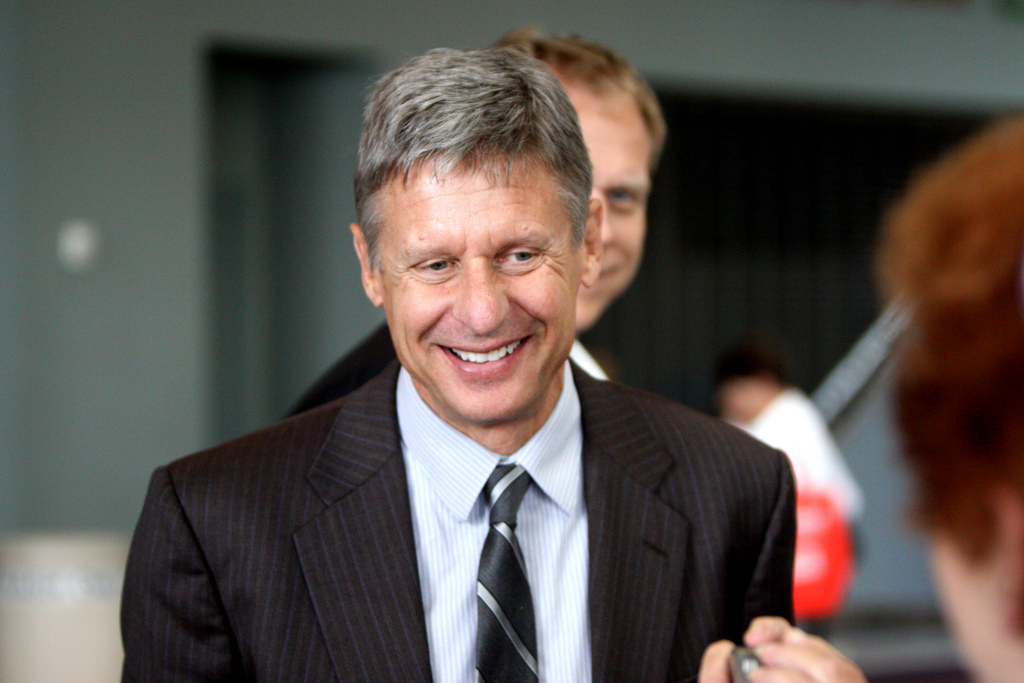 I had the pleasure of interviewing former New Mexico Governor and 2016 presidential candidate Gary Johnson at the Libertarian Party of California 2016 Convention, held at the LAX Hilton.  LP Nevada sent a volunteer delegation led by state chair Brett Pojunis to help the LPC with audio/video and communications.  I solicited Libertarian Party members and liberty activists for thought-provoking questions to ask our Party’s candidates.

ZF: Why are you running for President?

Gary: At the end of the day I think I’d actually make a good President, or I wouldn’t be doing this.  At the end of the day, regardless of how this turns out, I think I’ll have provided a voice of reason in all this.  So, on my deathbed, I’m going to reflect back on my own life, that I lived life to the fullest.  Doing this, I think that’s part of it.

ZF: Will you deport illegal immigrants and enforce laws against businesses that hire them?

Gary: First of all, no, I will not deport illegal immigrants, but there needs to be a process by which work visas can be obtained by illegal immigrants, and as long as they haven’t committed crimes in the United States, they would receive that and be allowed to stay.

With regard to businesses, I think that’s the absolute wrong path to take.  Something that’s not being understood right now is that businesses are required to take a certain number of documents—A, B, C, D, and E—to be able to hire someone from outside the country.  So the fact that they get presented with false documentation… if you shift that burden of proof to employers, then you’re going to end up criminalizing a lot of employers who are in fact complying with the law or “the rules” that currently exist.

ZF: Assuming Ted Cruz and Bernie Sanders do not win their party’ nomination, how will you help their supporters see the Libertarian philosophy in a better light?

Gary: Well, I think that’s the opportunity that exists right no; the opportunity that exists right now is that I think most people in this country are libertarian and they just don’t know it.  And I do believe that Donald Trump is going to be the [Republican] nominee and I do believe that Hillary is going to be the [Democrat] nominee and I think these are the two most polarizing figures in American politics today.  And if, from a Libertarian viewpoint, if you could set the table any better, I don’t know how you would do that.

ZF: Who specifically should not be allowed to own a firearm and, under the Johnson administration, who would be responsible for making that determination?

Gary: What I’ve said is that, should we be open to a discussion on keeping firearms out of the hands of the mentally ill—Zach, we should be open to that discussion, but I have to tell you… I’ve not heard any suggestion, anywhere, on how that might actually be accomplished, and I’m afraid that all the suggestions that I hear currently would restrict, potentially, you or I from owning a firearm because we’re not going to pass the litmus test.

And so the devil is in the details, but there’s nothing that I’ve heard of suggestion-wise that would work when it comes to keeping firearms out of the hands of the mentally ill.  But, as Libertarians, I think it’s a real mistake—I think it’s a mistake for anybody to say that they wouldn’t welcome a discussion on how that might take place or how that might be accomplished.  I’m just a complete skeptic on there actually being a way to do that.

ZF: How would the Global War on Terrorism change with Gary Johnson as Commander in Chief?

ZF: For you, what does the principle of non-aggression boil down to?

Gary: I believe in the non-aggression principle.  I think there are a couple of things as an example within the government that I’m actually working to overturn.  The most specific example of government and its egregious use of aggression is the drug war.  There’s been no one more outspoken about ending the war on drugs and then even pardoning those who have been convicted and are serving prison sentences for victimless nonviolent crime.

The other is the IRS and I am proposing eliminating the IRS because it wouldn’t be needed anymore, because we would eliminate income tax and corporate tax.  I also think that you’ve got a lot of aggression exercised by the government in jailing people who haven’t paid their taxes.

ZF: How can people find out more information about you?

Gary: Just Google me. Google ‘Gary Johnson’ and it’s all there.  You can’t get much simpler than that.