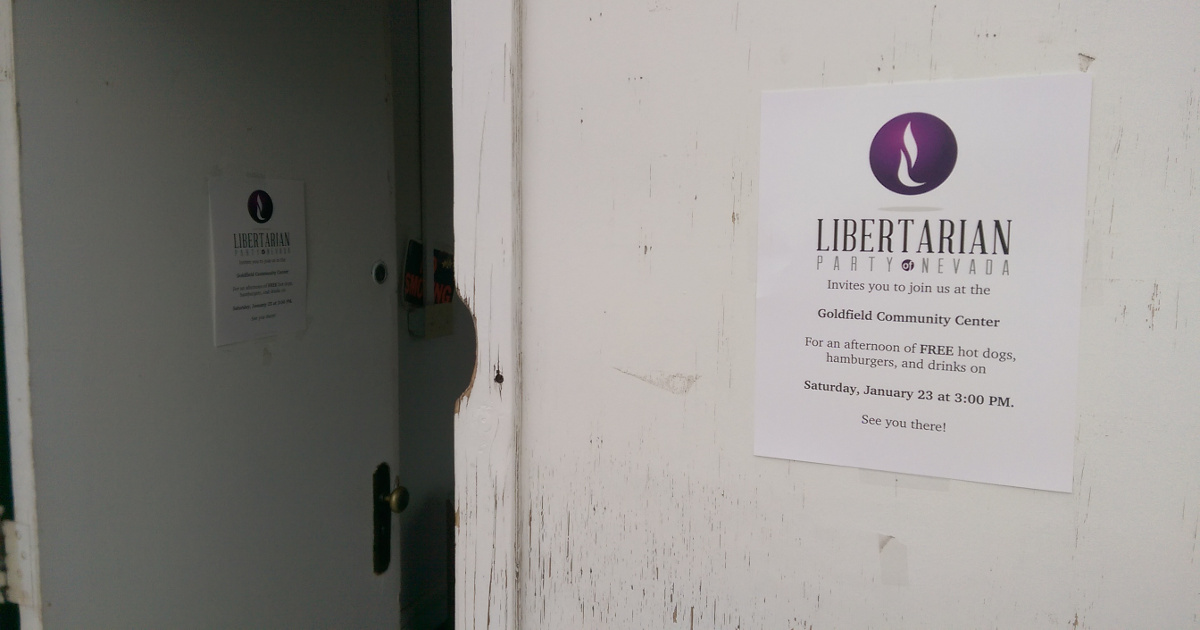 Why did we hold an event in Goldfield?

Earlier this month, the Libertarian Party of Nevada hosted an event in Goldfield, the capital of Esmeralda County. Most people in Nevada, if they know of Goldfield at all, know of it as a speed trap with old, seemingly decrepit buildings between Reno and Las Vegas, where the road suddenly makes a sharp 90-degree turn and the speed limit drops to 25. Then you make the turn, go a little further, the speed limit goes back up to 70, and you continue on your way.

So, why did the Libertarian Party of Nevada host an event in Goldfield, anyway? There are no gas stations there, though, if you ask the Esmeralda County Sheriff's Office nicely for a couple gallons, they'll help you out for a modest fee. There's only one restaurant - the Dinky Diner - though it's actually pretty good, believe it or not (try the Texas Benedict). There's only one hotel that's still open - the Santa Fe Motel & Saloon, all eight rooms of it - and a rather notorious hotel that's not. According to the US Census, less than 300 people live in Goldfield. What gives?

In short, Esmeralda County has consistently been more supportive of Libertarian Party candidates than the rest of Nevada for years, and no wonder - over 97% of the county is managed by the federal government, more than any other county in Nevada. Additionally, there's just something about Goldfield and Esmeralda County that attracts people who just want to do their own thing, whether it's the person that built their own castle or the artists that created the International Car Forest of the Last Church. If you talk to any of the locals in Goldfield, Silver Peak, or Fish Lake Valley, you'll hear a common refrain - everybody just wants to live free. That's what drew them to live in the least populous county in Nevada in the first place.

Esmeralda County has, quite probably, the smallest government the State of Nevada allows. Zoning and building restrictions are limited only by what's in Nevada's Revised Statutes and the limitations imposed by the BLM or other federal agencies on federal land. Property taxes are lower than most counties; considering how little land in Esmeralda County is privately owned, that's actually quite impressive. Meanwhile, sales taxes are as low as they can get in Nevada. Since there are no incorporated cities in Esmeralda County, there's only one police force - the Esmeralda County Sheriff's Office. The fire department, meanwhile, is volunteer-run. There is one Justice of the Peace, who has exactly one full time clerk. This minimalist government, which attracted many of the residents to the area in the first place, stays out of its citizens way, exactly the way Esmeralda County residents like it.

It's not very often you'll see a Libertarian Party blog sing the praises of a government - any government - but here goes: Well done, Esmeralda County. Well done. Keep up the good work, not that your citizens give you much of a choice.

This is why we wanted to host an event in Goldfield. When a local resident reached out to us and offered to help us organize and publicize one, you better believe we leaped at the chance. Here was a chance to meet and greet our supporters in the area and let them know that, yes, we've noticed their support through the years and thank them for their continued support. Rest assured, this won't be a one time event, either - there are already tentative plans to put something together sometime in April.

If you'd like to see us organize events in your community, let us know and help us out! You know your neighborhood and its needs better than we do - only working together can we make liberty happen.