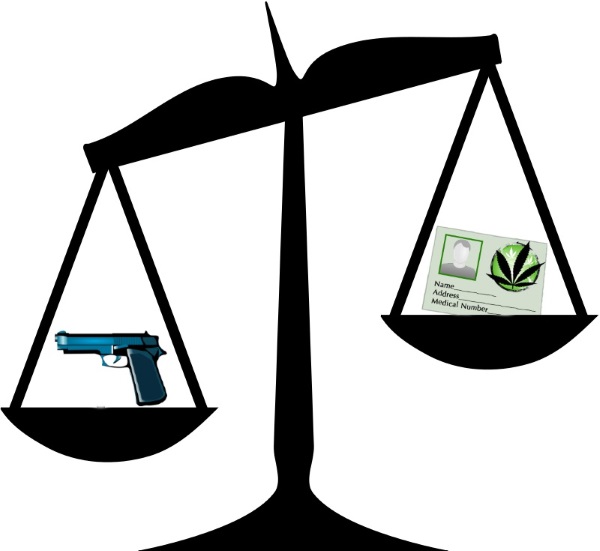 In August, the 9th Circuit Court of Appeals, which covers California, Oregon, Washington, Arizona, Nevada, Alaska, Hawaii, Idaho, Montana, Guam, and Northern Marian Islands, published an opinion on a case sent up from Nevada District Court, Wilson v. Lynch. The case was filed by a woman denied a firearms purchase because the firearms dealer knew that she held a medical marijuana card.

The 9th Circuit is notoriously unfriendly to gun rights, so it is not surprising that they issued the opinion they did, but coupled with the Drug Enforcement Administration's refusal last month to reclassify marijuana as a Schedule II drug, it is a devastating blow to Second Amendment rights and marijuana activists regardless.

There are a few reasons why these decisions are so frustrating.

The federal government's position, via the DEA, is that marijuana is a drug with no currently accepted medical use and a high potential for abuse. They consider this to be a Schedule I drug. In addition, to be included on this list means that there is a lack of accepted safety for use of the drug under medical supervision. A partial list of other Schedule I drugs include heroin, LSD, and ecstasy. By comparison, cocaine and methamphetamine are listed as Schedule II drugs, which are defined as having therapeutic value.

While the DEA claims that there is no medical use for marijuana, the U.S. Department of Health and Human Services petitioned for and was granted U.S. Patent No. 6,630,507 in 2003. The patent covers the potential use of non-psychoactive cannabinoids to protect the brain from damage or degeneration caused by certain diseases, such as cirrhosis. These chemical compounds found within the plant species cannabis sativa are not the compounds responsible for the sensation of being "high". While the ability to conduct research and studies on marijuana has been hamstrung by tight regulations on the plant, there does exist a mounting body of evidence showing that there are indeed many beneficial aspects to marijuana in general, and cannabis oil/cannabinoids in particular.

Against the backdrop of the federal government's hypocrisy on the medical benefits of marijuana, activists in individual states have been quite successful in instituting a sea change against the prevailing attitude of the public towards marijuana. As of June 2016, 25 states and Washington, D.C. have legalized the use of medical marijuana. Additionally, Alaska, Colorado, Oregon, Washington and the District of Columbia also allow recreational use of marijuana. Despite fear mongering ahead of these laws passing, the sky has not fallen with legalized marijuana usage. The American public wants access to marijuana, and as access increases, so too does the evidence that there are exciting medical developments giving hope to people who haven't found relief through conventional therapies, including veterans suffering from PTSD.

Given the above information, it wasn't surprising that in mid-August, the 9th Circuit issued an opinion barring the U.S. Department of Justice from spending money to prosecute federal marijuana cases if the defendants comply with state guidelines that permit the drug's sale for medical purposes. This opinion falls in line with Congress' passage in 2014 of a budget rule prohibiting the DOJ from using federal funds to interfere in the implementation of state marijuana regulations.

What is staggering, then, is the opinion two weeks later by the same Court to uphold the lower court's decision in Wilson v. Lynch. The Court opinion, in a nutshell, was that the woman could choose to hold a valid MMJ card, or purchase a firearm, but she could not do both simultaneously. The Court stated in their published opinion that the woman could amass firearms prior to acquiring her MMJ card, or she could surrender the card and purchase firearms subsequently. They felt that this was sufficient to satisfy her Second Amendment rights.

A major factor in the case was a letter issued by the ATF in September 21, 2011. The “Open Letter to All Federal Firearms Licensees” stated the following: "[A]ny person who uses or is addicted to marijuana, regardless of whether his or her State has passed legislation authorizing marijuana use for medicinal purposes, is an unlawful user of or addicted to a controlled substance, and is prohibited by Federal law from possessing firearms or ammunition. Such persons should answer 'yes' to question 11.e. on ATF Form 4473 . . . and you may not transfer firearms or ammunition to them. Further, if you are aware that the potential transferee is in possession of a card authorizing the possession and use of marijuana under State law, then you have 'reasonable cause to believe' that the person is an unlawful user of a controlled substance. As such, you may not transfer firearms or ammunition to the person, even if the person answered 'no' to question 11.e. on ATF Form 4473."

ATF Form 4473 is the form used to perform federal background checks for the purchase of any firearm from a licensed firearms dealer (even at gunshows or online!). The language of the above referenced question 11.e. states, “Are you an unlawful user of, or addicted to, marijuana or any depressant, stimulant, narcotic drug, or any other controlled substance?”

If you think that you can purchase firearms and then get an MMJ card and be in the clear, I wouldn't be so sure. The ATF is not known to err on the side of the individual in gray areas, and it has made it very clear in the above "Open Letter" that possession of both firearms and MMJ cards is going to be a problem.

All the ATF has to do is feed the list of MMJ cardholders into the NICS background check database, and the result will be a denial. Waiting until recreational marijuana passes to avoid the need to register for an MMJ card might not make a difference, either. Las Vegas is a betting town; given the penchant of the DEA to ignore state marijuana laws, and their use of technology such as license plate readers and facial recognition software, what are the odds that they won't have their own list compiled of frequenters of dispensaries, which could also be fed into the NICS system?

Lying on Form 4473 is a felony, punishable by up to ten years in prison, and barring you from ever owning guns legally again, absent a pardon. If you say "No" on question 11.e. because you believe you are a lawful user of marijuana in a state that allows its use, you have committed a felony. If you answer "yes", you will be denied the right to purchase. Until the federal government removes marijuana from the list of Schedule I drugs, or Congress passes a law addressing this issue in a way that protects gun owners from prosecution, this is a Catch-22. After all, Congress prohibits federal funds from interfering with state marijuana regulations; it didn't say anything about not using federal funds to go after gun owners. Choose wisely.

If you want to get involved in the groups fighting to protect your rights, volunteer today!