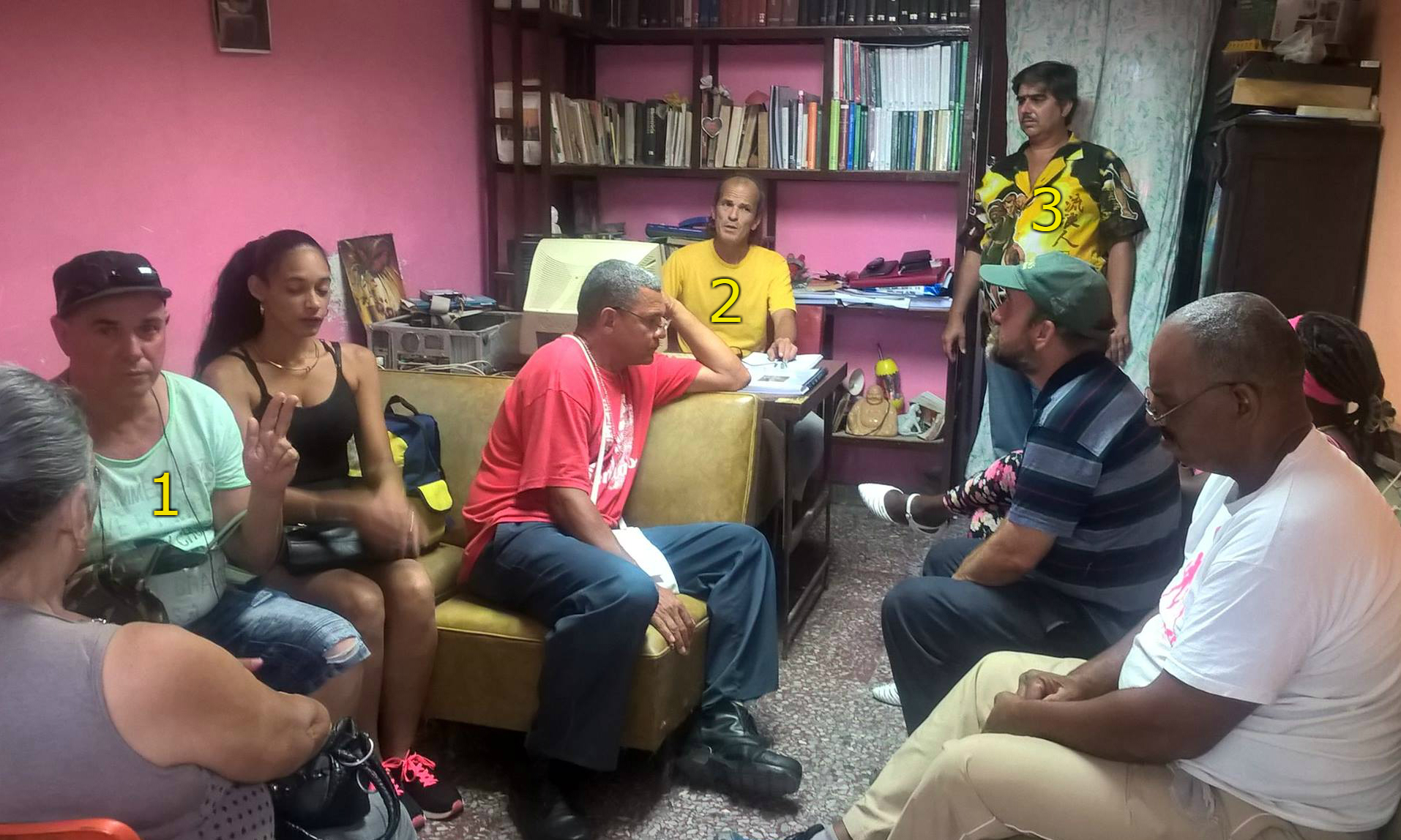 Following the U.S. Libertarian National Committee's denunciation of recent arrests, the Cuban regime has arrested another libertarian activist.  Eduardo Ramos is the fourth peaceful activist the Raul Castro regime has specifically targeted as a libertarian.  A photograph and a short, hasty press release from Mises Cuba says:

"We regret to report that one of the founders of the Benjamin Franklin Libertarian Library was arrested this morning by agents of the National Revolutionary Police and State Security agents [the Cuban secret police]. The libertarian they arrested was Eduardo Ramos Balaguer. He was seen by his companions last night when they visited the mother of Ubaldo Herrera, another libertarian detained [and still imprisoned] by the regime."

Eduardo Ramos is at the far left of the photo (light green shirt).  The gentlemen featured in this photo, according to their numbers, are:

1) Eduardo Ramos - co-founder of the Ben Franklin Libertarian Library in Havana, who was arrested by the secret police in the early hours of yesterday morning

3) Heriberto Pons - co-founder of Mises Cuba and the Ben Franklin Libertarian Library, and the political police have been harassing him at his home.

This is not the first time State Security has gone looking for Mises Cuba members at their homes, nor the first time they've done so dressed in civilian clothes. However, this comes the day after the dramatic Spanish-language announcement of the U.S. Libertarian National Committee's condemnation of the arrest and incarceration.

The list of known prisoners in the Melena II labor prison who are libertarians or libertarian sympathizers, has grown to include Ubaldo Herrera Hernández, Manuel Velázquez Visea, René Ronco Machín, Rolando Guerra, Roser Ayala García, and Rafael Averof Rodríguez. Ubaldo and Manuel were the original two to be arrested by the secret police and sent to the Cuban Gulag after a kangaroo court convicted them of assault.  The others are fellow prisoners aligning themselves with the libertarians.  Ubaldo and Manuel face charges of distributing enemy propaganda.

Cuba's libertarians have officially asked the international libertarian community for help. You can write to several human rights watch groups with the names of the libertarian prisoners. We recommend Amnesty International, The Cuban Observatory of Human Rights, Human Rights Cuba, and the Cuban Commission of Human Rights and National Reconciliation.  (Come on folks... all you have to do is write a 4-sentence email with the prisoners' names, the false charges, what prison they're in, and that you're concerned that they're regularly beaten or tortured.  You can send the same exact email to all 4 organizations.)

You can also directly contact Cuba's Ministry of Foreign Relations on Facebook and call for the immediate release of the libertarian political prisoners (@CubaMINREX on Twitter).

To give a much-needed Bitcoin donation, which literally helps keep the lights on and keeps the Cuban libertarians connected to the outside world, the Mises Cuba Bitcoin wallet is P5HxxXrk6uyQtz8F98NkcCLPwjqECAMkQU9kDBLo5vmtq7dPaYh6.

Finally, you can visit MisesCuba.org or email [email protected] to find out how else you can help Mises Cuba and the Benjamin Franklin Libertarian Library.