Gun rights have nothing to do with militias 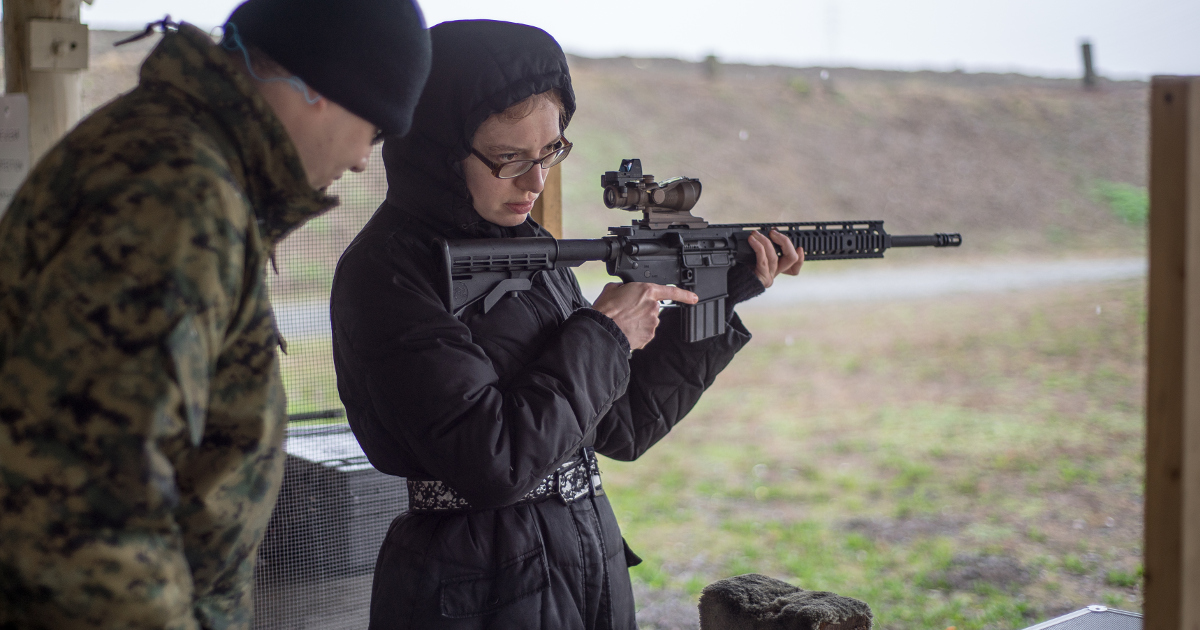 Gun Club by Peretz Partensky is licensed CC BY 2.0.

Not anymore - and why that's okay.

Ever since the San Bernardino massacre, the never ending national conversation surrounding gun rights has reasserted itself once more. The usual cast and characters have adopted their usual positions - either everybody needs to be armed or nobody should be armed - and, past that, the only people profiting from all of this are monomaniacal journalists focused exclusively on the scoop and the new media outlets that cover them. It's a tired, old conversation, one that will never get anywhere since neither side trusts the other and the courts have already decided anyway, so let's talk about something much more interesting:

Are gun rights, as currently exercised in a modern society, a useful check on government power?

James Madison certainly thought so, and said as much in Federalist No. 46:

Let a regular army, fully equal to the resources of the country, be formed; and let it be entirely at the devotion of the federal government; still it would not be going too far to say, that the State governments, with the people on their side, would be able to repel the danger. The highest number to which, according to the best computation, a standing army can be carried in any country, does not exceed one hundredth part of the whole number of souls; or one twenty-fifth part of the number able to bear arms. This proportion would not yield, in the United States, an army of more than twenty-five or thirty thousand men. To these would be opposed a militia amounting to near half a million of citizens with arms in their hands, officered by men chosen from among themselves, fighting for their common liberties, and united and conducted by governments possessing their affections and confidence.

Unfortunately, James Madison's numbers were a little off, even during the time of his writing in 1788 - Napoleonic France, with a population of roughly 30 million, would support a national army that was twice the size of the one he thought our federal government could support less than 20 years later; using more modern logistical techniques, the USSR conscripted close to 35 million soldiers out of a population of almost 200 million, or more than 10 times the number of soldiers that Madison thought a nation could support. He was also astonishingly optimistic about the ability of militias to choose effective leadership, especially on the eve of battle - this starry-eyed ideologically driven optimism, though well meant, was largely discredited by the uneven performance of the citizen militia in the War of 1812 against much better organized and trained British regulars. A similar experiment would be tried, curiously enough and somewhat by accident, by the Bolsheviks near the end of World War I - it didn't end well for them, either, and more forceful means were eventually used to motivate and discipline their forces through the remainder of the Russian Revolution.

The truth is, even by Madison's time, it was clear that a well trained, well equipped, professional military could outperform any citizen militia of similar strength - this is why George Washington spent so much time running away from the British during the Philadelphia campaign and why it took over a year since the Declaration of Independence was issued for the Americans to win a significant enough victory to attract a vitally necessary alliance with the French. What Madison and others hoped was that, instead of maintaining an expensive and potentially liberty-threatening standing army, the United States could adopt a defensive strategy that took advantage of its size and population by simply having armed citizen militias throughout the land that could be equipped, trained, and deployed against an invading enemy during the time it would take an enemy to get from one part of the United States to the other. This, curiously enough, is another accidental parallel to Russian military strategy, in that the Russians relied on defense in depth, slow transport times, strained logistics for invaders, and a near-inexhaustible supply of manpower from the Napoleonic War all the way through World War II; thankfully, the United States learned the limits of this approach without enduring over 20 million casualties in the process.

Nowadays, the difference in abilities between a modern professional military and a bunch of rifle-wielding civilians is even more pronounced. To start with, private citizens in the United States do not possess anywhere near the sort of firepower required to attempt even a Syrian-style insurrection - though there are undoubtedly a few citizens keeping a small supply of MANPADS squirreled away somewhere surreptitiously, the number is almost certainly not high enough to make an appreciable dent against the best funded military on Earth; the same could be said for armored vehicles, automatic weapons, howitzers, missiles, or anything else opponents of modern militaries have used to reduce their effectiveness. Even if there were enough automatic weapons to, say, meaningfully fight a set-piece battle against a small battalion, the logistics of citizen weapons would be a nightmare - while the military would be standardized on a small selection of NATO rounds, civilian automatic weapons could rely on Russian or Chinese rounds, NATO rounds, or just be single fire hunting rifles or handguns requiring all sorts of ammunition types. This would make each person participating in a citizen militia dependent on their own ammunition stores, as well as their ability to transport that ammunition, which would drastically reduce their effectiveness in prolonged battle (meaning, in this case, any battle that lasts more than an hour or two). Even if we hand wave the logistical issues aside - which would be a mistake - there's the small issue of coordination, which would require communications (which are easily and routinely compromised), and some method of creating an effective chain of command while under fire. Oh, and our military has a few of these things lying about, too, for good measure.

In short, if your plan for overcoming the overbearing power of the government is an armed insurrection conducted by a bunch of gun owners of various ages and physical conditions - half of whom might not even be on your side - carrying whatever arms they can pack with whatever ammunition they can find, training themselves in effective infantry tactics on the fly, and coordinating with each other via insecure channels, you need a better plan.

So, if the original plan laid down by the Founding Fathers of a well armed citizen militia keeping the federal military in check was almost dreamily optimistic when it was first conceived in the late 18th century, and is suicidally unrealistic today, then what can be done?

The answer is ideas. Truth be told, winning our freedom by the gun was never realistic - freedom won by the gun can be taken away by bigger guns. The only way freedom can endure is through the power of ideas, through persuasion, and through voluntary action. It is because of ideas - ideas like freedom, duty, and honor - that our military hasn't overthrown our government in a bloody coup, even though it clearly possesses the firepower and, quite possibly, the political support as well. It is because of ideas that we try, as often as practical and oftentimes more often than that, to work together and settle our differences without violence or bloodshed through the political process. It is because of ideas that we try, perhaps less often than we should and definitely less often than we could, to ignore differences when they don't directly affect us and let everyone live their own lives while we live ours.

If you would like to help us share our ideas, help us turn our ideas into political action, and help us make Nevada a better place without violence or bloodshed, we need your help. Join our party. Volunteer. Help us out. Even if you just register to vote, that would help us get your voice heard.