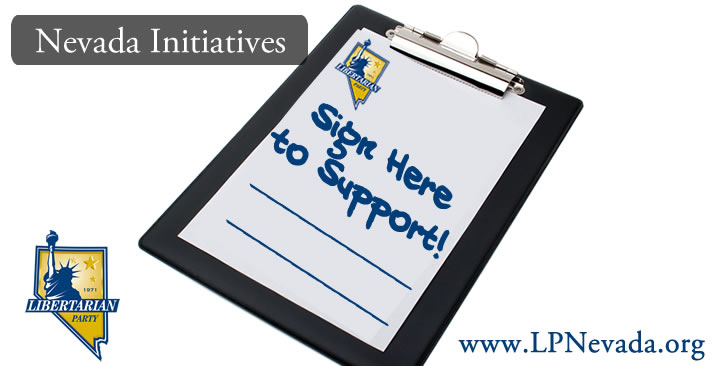 Question 1: Nevada Background Checks for Gun Purchases. LPNevada is opposing this initiative. We are working with Gun Owner's of America, the National Rifle Association, and other 2nd Amendment organizations to help stop this from passing. This initiative is on the November 2016 ballot and will require all Nevada gun transfers or sales to gun through licensed gun dealers. This licensed gun dealer will conduct a background check on the person wishing to buy the gun. This measure does little to nothing to stop criminals from obtaining guns, who already have to go around the background check system. Instead, this measure makes it more expensive for a citizen to obtain a gun legally as he or she must pay a "fee" to the licensed gun dealer. Make no mistake: this is just another trampling of our 2nd Amendment rights supported by former New York City mayor Michael Bloomberg. Help us keep the liberal agenda out of Nevada - No on Question 1!

Question 2: Regulate and Tax Marijuana Like Alcohol. LPNevada is supporting this initiative. We are working with the Coalition to Regulate Marijuana Like Alcohol. This initiative is on the November 2016 ballot and will end marijuana prohibition in Nevada and replace it with a system in which marijuana is regulated and taxed similarly to alcohol. Marijuana sales would be conducted by licensed businesses that generate new tax revenue for our state and its localities. Law enforcement officials would be able to redirect their time and resources toward addressing serious crimes. And adults 21 and older who use marijuana responsibly would no longer face arrest and prosecution. Spread the word - Yes on Question 2!