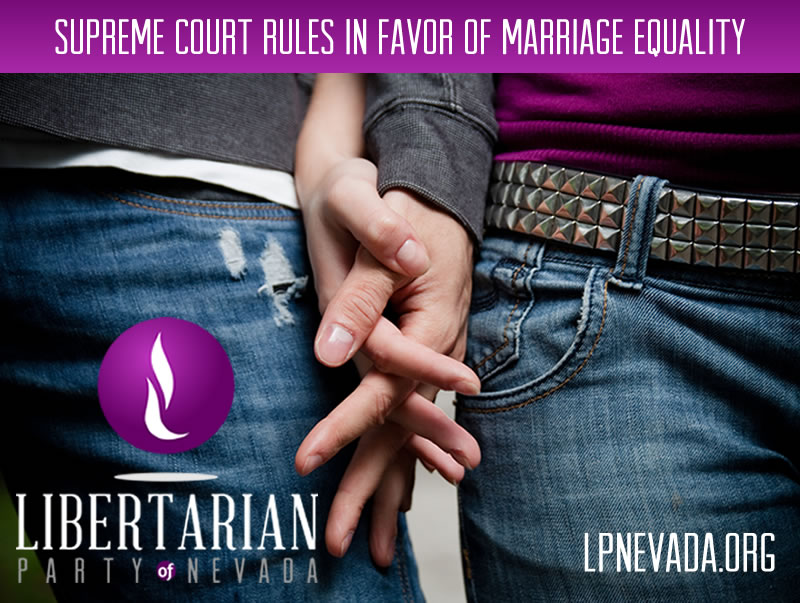 The Libertarian Party of Nevada and Out for Liberty Celebrate the Supreme Court Decision on Marriage Equality.

The Supreme Court struck down marriage bans today as unconstitutional, an issue the Libertarian Party has been fighting for since its inception in 1971.

LAS VEGAS, Nevada, June 26, 2015 - The Libertarian Party of Nevada(LPNevada), the fastest growing political party in Nevada and the only party which supports individual freedom, and personal responsibility along with Outright Nevada, the LGBT Caucus of the Libertarian Party of Nevada, commends the Supreme Court of the United States in their decision to strike down unconstitutional and pointless bans against gay marriage nationwide.

On June 28, 1969, the gay rights movement began in earnest, when police raided The Stonewall Inn, a popular gay bar in New York City’s historic Greenwich Village. Although these raids were then commonplace, this time, the patrons fought back. We feel that the participants in the Stonewall Riots deserve as much credit and praise as the groups involved in today’s ruling, and we are happy that the Supreme Court has finally brought us one step closer to realizing the equality the rioters fought for.

In 1972, John Hospers was the first Libertarian Party candidate for the office of President of the United States.  He was also the first openly gay man to run for the office of United States President. The same year Hospers ran for office the Democratic Vice-Presidential nominee referred to “queers” in a Chicago speech. This is also the year that the Libertarian Party released their first platform, which endorsed gay rights including full marriage rights and a call for an end to anti-gay laws.

During the 2008 Presidential campaign, Democrats Barack Obama, Joe Biden and Hillary Clinton and Republicans John McCain and Sarah Palin all openly opposed gay marriage. The movement toward marriage equality was, until very recently, successful without the support of any major political party other than the Libertarian Party. Additionally, in many cases marriage equality was publicly condemned by both Democrats and Republicans.  This has been, and continues to be, a movement by the people, for the people.

“Libertarians are proud to have been on the right side of history for the last 43 years, and we welcome all Democrats and Republicans to the cause of individual rights with open arms,” said Brandon Ellyson, Chairman of Outright Nevada. Libertarian Party of Nevada Chairman Brett H. Pojunis said “This is a huge win for Civil Liberties and we are glad to see the rest of America is finally catching up to where the Libertarian Party has been for decades.”

The Libertarian Party is third-largest and the fastest growing political party in the America. Millions of Americans voted for Libertarian Party candidates in past elections since the Libertarian Party offers a viable alternative to the broken 2 party system in America. Libertarians believe the answer to America's political problems are embracing a free-market economy and the abundance and prosperity it brings; a dedication to personal freedom and civil liberties that marks this country above all others; and a foreign policy of free trade, non-intervention, and peace as intended by America's founders.