They’d started as a tiny group of activists calling themselves the Cuban Anarchocapitalist Club and later formed a Mises Cuba study group. The leaders of this small group of new libertarians had learned about libertarian ideas on their own, with their limited access to the internet. They became libertarian simply from a sincere desire to learn

These brave freedom activists first came to the Libertarian Party of Nevada’s attention in February of 2017, when a Cuban refugee recently arrived in Miami contacted one of our members asking for help. Two libertarians, Ubaldo Herrera and Manuel Velasquez, were arrested by State Security officers (the secret police) and sentenced to time in prison in a kangaroo court on false charges.

LP Nevada’s Executive Committee voted to pass a resolution condemning the Cuban government for the unjust arrest of Ubaldo and Manuel, and proclaiming solidarity with Cuba’s libertarians. Two days later, LP New Hampshire passed a similar resolution. LP Oklahoma followed, and so did LP Missouri, LP North Carolina, and multiple other LP affiliates, until finally, the LNC passed a resolution as well. Even the Libertarian Parties of Spain and Russia joined in this international declaration of solidarity with the oppressed in Cuba.

As the international spotlight grew, so did the government’s repression. Since the Cuban government showed it was serious in its repression of Cuban libertarians, the libertarians have gotten serious about organizing. On May 7, 2017, the Cuban Libertarian Party – José Martí was formed in Havana (they named their LP after the father of Cuba’s independence from Spain).

The Mises Cuba study group evolved into the Mises-Mambí Institute of Cuba, a think tank and incubator for libertarian activism in Cuba and Venezuela. The Cuban libertarians’ struggle has also been covered by Reason Magazine, the American Mises Institute, the PanAm Post, Info Wars, Lions of Liberty, Being Libertarian, and dozens of other venues.

Whereas the Cuban libertarian movement began with only a handful of people meeting in a home in Havana, there are now libertarians in at least six provinces across the island. Cuba’s libertarians have also been cited as a source of inspiration for libertarians in Venezuela, where the opposition not only faces a domestic usurper dictatorship, but also a foreign occupation by Cuban troops. (See also: Cuban Libertarians Protest State Sending Troops to Venezuela) 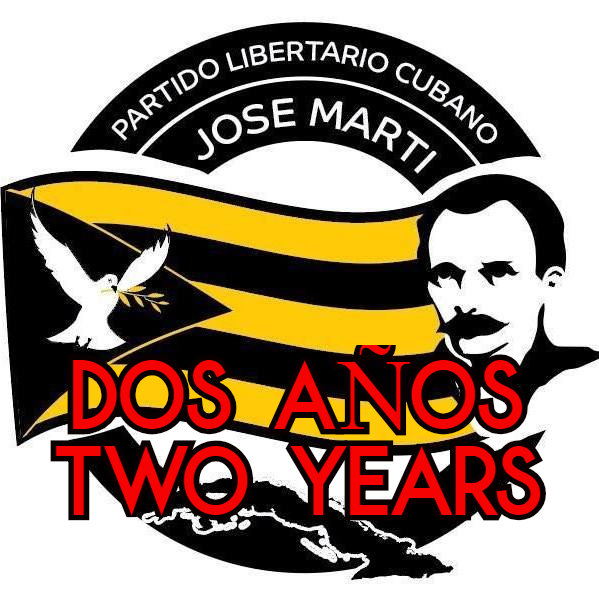 It hasn’t been an easy road. The Secretary of the Cuban LP was sent to prison for six months for posing in a photo with a US flag. Another woman, Lianet Guerra, isn’t even an activist; she’s the relative of a Libertarian activist, and she was sent to prison on false charges of prostitution (that’s how the regime interpreted her traveling to Italy with her Italian fiance). She’s still in prison.

Nelson Rodriguez Chartrand, co-founder of both the Cuban LP and the Mises-Mambí Institute, had to flee from Cuba because State Security agents were getting tired of dealing with him and were threatening to kill him. He’s picking up the pieces in Brazil.

Yet the libertarians in Cuba keep marching. They keep protesting. They keep resisting governmental repression. Let their cuorage motivate every one of us in the US to take advantage of the relative freedom we enjoy, and fight big government at home while we still can. ¡Adelante la libertad!

Images courtesy of the Cuban LP and the Mises-Mambí Institute.