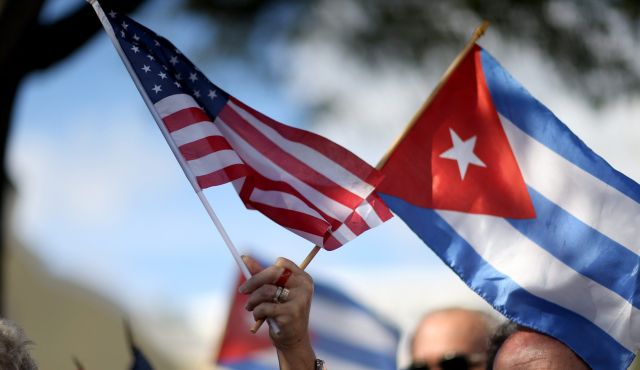 Ubaldo Herrera Hernandez and Manuel Velazquez Visea have lit some huge brush fires of liberty in the short time since their arrest by State Security and incarceration in the Cuban Gulag.  After 10 Libertarian state parties in the United States, as well as the Libertarian parties of Spain and Russia, condemned the action and called for the release of Herrera and Velazquez, the U.S. (national) Libertarian Party published the following:

The Libertarian National Committee of the United States condemns the arrest and detention of political dissidents Ubaldo Herrera Hernandez and Manuel Velazquez, who have been detained by the Cuban government since their arrest on February 2.

Both men were targeted for peacefully promoting small government, civil liberties, and free markets, for which they occasionally distributed flyers and put up posters.

Hernandez and Velazquez are members of Mises Cuba, an independent think tank which is based on the Ludwig von Mises Institute of Auburn, Alabama.

“Hernandez and Velazquez are political prisoners whose actions have harmed no one and damaged no property,” said Nicholas Sarwark, Chair of the Libertarian National Committee. “We stand in solidarity with our fellow freedom fighters in Cuba.”

The Libertarian National Committee passed a resolution asserting that the activists’ arrest and detention “illustrate the threats to freedom we all face around the world.”

It further states:
“The Libertarian Party calls on the Cuban government to immediately release details of the above-mentioned arrests and detentions, including the specific charges being levied against the individuals in question. In the absence of such information, we call for the release of these prisoners.

“Libertarian activism worldwide must not be deterred by the attempts of authoritarian leaders, totalitarian governments, and dictatorial regimes to silence the voice of freedom. We condemn any acts of official oppression, and uphold the promotion of limited government and free markets in any country. Furthermore, we call on the U.S. Department of State to publicly denounce violations of the right to free speech, the right to peaceably assemble, and the right to due process abroad.”

For more information about this story:

The Libertarian Party of Nevada extends a sincere THANK YOU to the LNC members who votes Yes on this resolution, on behalf of the libertarians of Mises Cuba and the Ben Franklin Library, and on behalf of the families of the now 6 imprisoned libertarians: Ubaldo Herrera Hernández, Manuel Velázquez Visea, René Ronco Machín, Rolando Guerra, Roser Ayala García, and Rafael Averof Rodríguez.  Repression against the ideas of liberty carries on in Cuba and elsewhere.  Days ago, Rodrigo Quintana of Paraguay's Authentic Radical Liberal Party was shot dead by police.  Less than 2 weeks ago, Javier Oteca was murdered in Colombia.  Otaca was a libertarian activist who'd been occupying and reclaiming lands stolen from indigenous peoples through eminent domain or forced evictions by paramilitary forces and given to crony corporations. Early in February, a libertarian and Community Police (anti-cartel self-defense militia) veteran named David (last name withheld) was murdered in Mexico City.  Last summer, libertarian activist Salvador Olmos Garcia was killed by crooked police in Oaxaca.  Sadly, the international libertarian movement has its martyrs, but it now also has international attention.

Also, Guatemalan libertarian author, activist, and talk radio star Gloria Alvarez recently dedicated an episode of the politics and current events talk show Libertopolis to the heroism of libertarians in Cuba.  Havana-based activists Nelson Rodriguez and Caridad Ramirez talked about the arrest and incarceration of Ubaldo Herrera and Manuel Velazquez, about the activism of Mises Cuba and the Benjamin Franklin Libertarian Library, and about the government's increased repression against libertarians and all other perceived opposition on the island.  Spanish speakers can enjoy the interview here.  LP Nevada extends a sincere thank you to Ms. Alvarez and to the independent Chilean libertarians who plan on protesting the incarceration in front of the Cuban embassy in Santiago in the near future.

Cuba's libertarians have officially asked the international libertarian community for help.  You can write to several human rights watch groups with the names of the libertarian prisoners. We recommend Amnesty International, The Cuban Observatory of Human Rights, Human Rights Cuba, and the Cuban Commission of Human Rights and National Reconciliation.  You can also directly contact Cuba's Ministry of Foreign Relations on Facebook and call for the immediate release of the libertarian political prisoners (@CubaMINREX on Twitter).  Finally, you can visit MisesCuba.org or email [email protected] to find out how to donate Bitcoins to Mises Cuba snd the Benjamin Franklin Libertarian Library.