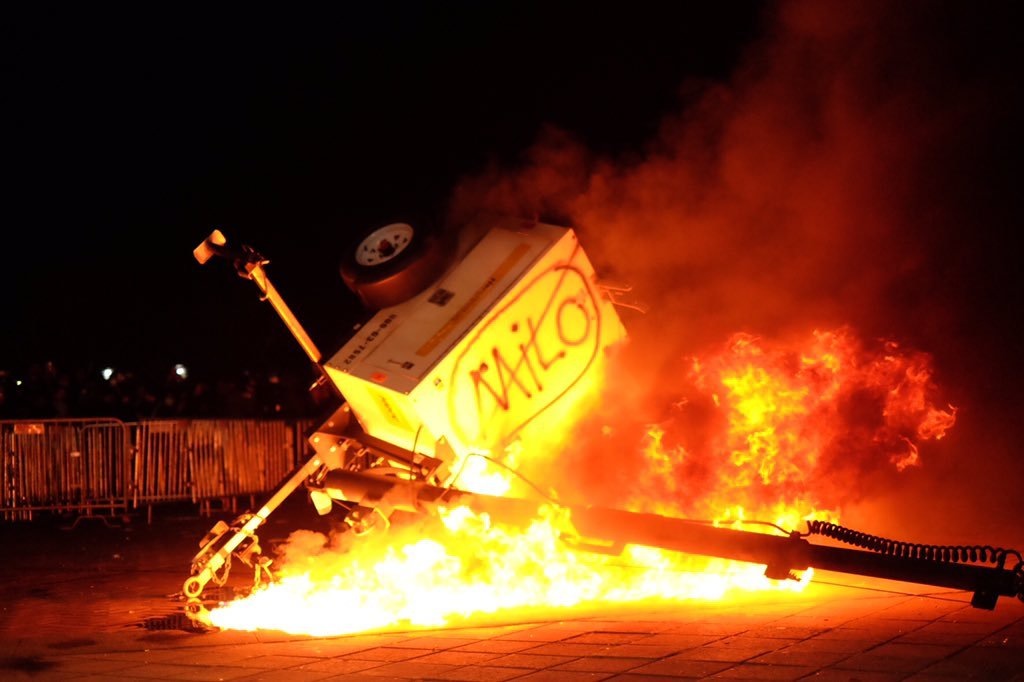 Milo Yiannopoulos is surrounded by controversy.  The dramatic episode of Milo Yiannopoulos's canceled speech and leftist riots on campus and in the streets of Berkeley has been a drama of confusion. The most widespread images include the black-clad anarcho-communists, waving their black flags as windows are broken, bonfires ignite, and they face off against the police. Here are the facts about what Milo Yiannopoulos has said, done, and planned to do.

The university’s Office of Student Affairs said in a letter sent to the College Republicans of Berkeley, “We are deeply concerned for all students’ safety and ability to pursue their education here at Cal beyond Milo’s speech...  Milo’s event may be used to target individuals, either in the audience or by using their personal information in a way that causes them to become human targets to serve a political agenda.”

From this, the rumor spread like wildfire and appeared on several "fake news" blogs.  The problem with these websites is, like a broken clock, they're still correct twice a day.  This time was not one of them.  From these sources, Libertarian Party Chairman Nicholas Sarwark got his information.  The Chairman then made the statement on social media which was lambasted by the alt-right and libertarians with Republican Stockholm Syndrome.

The Chairman was incorrect because the best sources available were incorrect.  Nonetheless, the alt-right propaganda outlet Breitbart wasted no time ridiculing Sarwark and quoting some of the vilest Facebook comments about him.  Professor Cicciariello-Maher was wrong and his statement ultimately caused damage in the form of destructive rioting and violated free speech for Milo and College Republicans.  Part of that damage is that the Libertarian Party Chairman's credibility suffered a setback.  Thankfully he's a good man and will quickly recover from this in stride.

However, Milo's recent behavior loaned credibility to the rumors.  On January 28, three days before the Berkeley Speech, Breitbart proudly reported that Milo gave his audience the phone number to the Immigration and Customs Enforcement hotline and encouraged the audience to report undocumented students.  His background display featured the slogan "support women and homosexuals; purge your local illegals.

The Independent reported that Milo Yiannopoulos flatly denied the allegations that he planned to reveal the names of undocumented students.  There is currently no evidence that Milo planned to name names.  On this front, the professor at Berkeley initiated a lot of damage.  After the rioting, Milo Yiannopoulos is undoubtedly more famous and more controversial than he ever was before.  He and his message both have more attention than ever before.

It was impressive that the leftist anarchists held their own against the police, but it’s shameful and vulgar that they would cause destruction of public and private property in a community that overwhelmingly supports leftist ideals and leftist activism.

Some of my good friends, dedicated activists in the Libertarian Party and other pro-libertarian groups, have declared that Milo is a "bigoted piece of shit" but they will still defend his right to speak.  He does have the right to speak, and the College Republicans at Berkeley have a right to have a speaker who represents them.  The fact that it's someone who's from the alt-right speaks volumes of how the Republican Party has decayed.

The problem is that by giving out the ICE contact information in his call to action to the Right, Milo is escalating the threat that real human beings with problems and aspirations will have their bodily autonomy violated as they are removed from this country.  The only borders libertarians should be militant about defending are the boundaries of the chunks of private property we individually own.

Libertarians with conservative leanings love to claim the injustice of illegal immigrants sucking up all the tax dollars.  President Trump claimed in a 2016 campaign speech in Arizona that illegal immigrants cost America over $113 billion a year.  This number looks staggering but it is weak considering the trillions of dollars spent on the War on Terror.  On top of what the government spent for the War on Terror, it added $1.9 trillion to the national debt as of January 2017.

The government, with force against the American taxpayer, has consistently found the means to fund the public safety-net for citizens and non-citizens, the War on Terror, the corrupt-capitalist bailouts TARP, foreign aid, and the development and production of weapons to sell to foreign governments.  Immigrants are not the problem.  The Federal Reserve banking cartel that produces economic theft is the problem.  Focusing on illegal immigrants instead of marching to cancel the Federal Reserve's charter is scapegoating.

What the militant left threatened to do in Colorado is also unacceptable.  To put the names of all buyers of tickets to Milo Yiannopoulos on a list of known neo-Nazi supporters is simply unnecessary and spitefully silly.  Most of the people who attend his speeches attend to be entertained and because it's a major event at their campus.  Putting the names of these people, some of whom are leftists who know how to disagree respectfully, on a list that will result in them being targeted for harassment is a blatant violation of the non-aggression principle.

In these turbulent times, we should be proud to be Libertarian.

Image courtesy of Uvoa on Reddit.  This article was originally published this morning in Spanish by Zach Foster.