The Libertarian Party has been making the news again! LP Nevada was mentioned when both KTNV 13 (ABC News Las Vegas) and the Las Vegas Sun both ran articles about the Democrats coming out ahead of the GOP in Nevada’s recent elections. We’re no fans of the Democrats by any means, but this Democrat-controlled state government will have to work hard to top the Republicans in historic tax hikes. So by all means, let the Nevada GOP choke on its own karma.

In neighboring California, Libertarian Supervisor of Riverside County Jeff Hewitt is taking a leadership role in the new county committees assessing “the good and the bad” of local marijuana regulations. According to a Patch news article, Hewitt has previously shared the concerns of cannabis advocates about the cannabis licensing approval process. Right off the bat, electing Hewitt to county-level office might be one of the best things for humanity the LP has ever done.

Then, there’s the ongoing circus called the 2020 presidential primaries!

Since ex-Vice Presidential candidate Governor Bill Weld left the LP to challenge Donald Trump in the Republican primaries, the public has been wondering who the next “mainstream” contender will step into the race. An optimistic Business Insider article talking about Weld stresses the statistical pattern that sitting Presidents who face serious primary challenges usually don’t win reelection.

A less optimistic article in the Pittsburgh Post-Gazette reminds would-be reformers like Weld that the GOP is Donald Trump’s party now, whether they like it or not. Frankly, we in the LP agree; and with the exception of election trolls like Bill Weld and a scant few other libertarians hiding in Republican clothing, we generally believe that there’s no such thing as a Never Trump Republican.

Speaking on that topic, there’s currently lots of talk that Congressman Justin Amash is considering making his play in the LP. Politico and Reason have confirmed that Congressman Justin Amash hasn’t ruled out a 2020 run on the LP ticket. If he did, that would certainly be dynamite. His libertarian lean is unquestionable. You can’t get more mainstream than a sitting multiple-term US Congressman, and one who expresses his thoughts in a way that makes fewer enemies than when Ron Paul was in the House. Best of all, Amash is half-Syrian, so there probably won’t be any Aleppo moments with him. 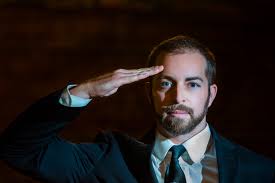 Until Amash decides on whether he’s hot or cold on running for President on the Libertarian ticket, the LP’s best organized and best established presidential candidate is Adam Kokesh. On the campaig trail, Kokesh recently made radio appearances for KOGO AM 600 News Radio and We Are Libertarians Radio. He was interviewed by Nevada’s own Josh Sigurdson for Brainfeed TV, where Kokesh gave the inside scoop on his campaign, current events, and future plans for civil disobedience (i.e. getting in trouble with the law).

Outside of presidential politics, the LP has still been active lately, and it’s been picking up in the news.

Vicky Rose of LP Mississippi was mentioned in Mississippi Today in an announcement of Fall 2019 candidates. Vicky is running in a special election for District 37 State Rep. Go get ’em, Vicky! There’s also a great article on LinkedIn Pulse with the juicy details on that race and what’s at stake.

In another episode of our nonstop saga of getting ballot access, AL.com reports that LP Alabama is suing Secretary of State John Merrill over a new $34,000 fee his office wants to charge political parties for accessing voter lists. It’s always something with these Republicans–they have to resort to using the same electoral/voter suppression tactics as Fidel Castro and Hugo Chavez.

LP Colorado stepped up recently to voice outrage over Colorado legislators proposing a plastic straw ban just like the one in California. Michael Lopez of LP Colorado wrote a great op-ed for Westword, “This legislation is not progressive or moral, nor is it the way of Coloradans. The Libertarian Party calls on the legislature to cease their march toward social engineering through force, as they do in California.” That same op-ed was later quoted in a different article in the same publication. Go Mike!!!

We’ll keep you updated on the Libertarian Party making the news. In the meantime, keep reading the LP Nevada Blog and enjoy!