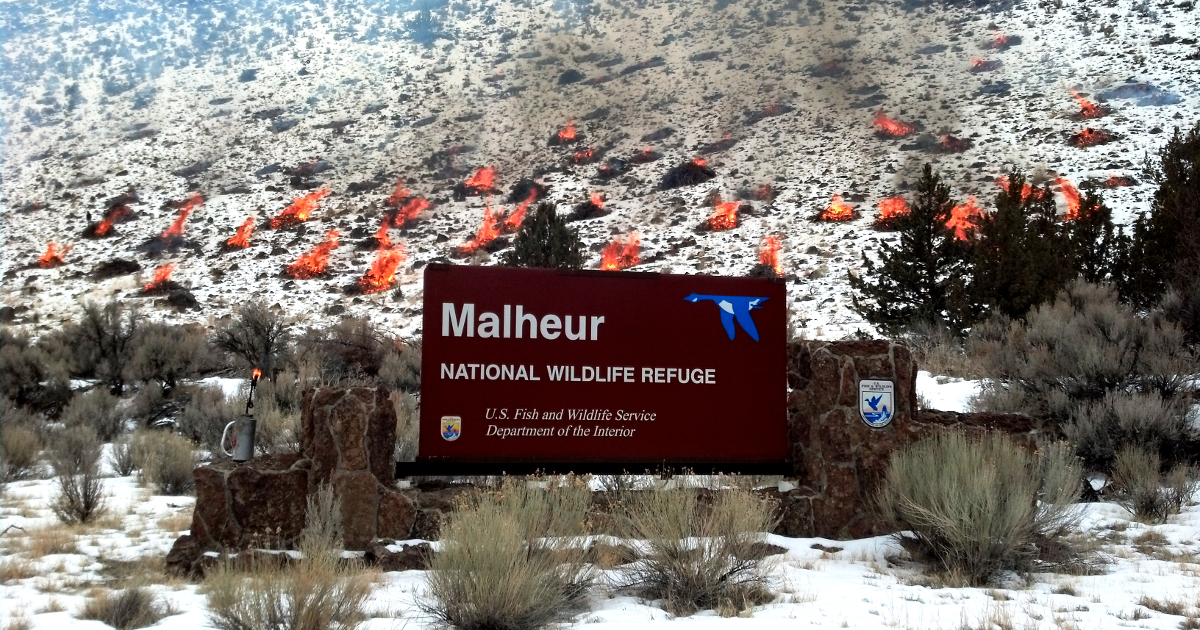 Whose rights are the protesters representing, exactly?

Over the weekend, the Bundy family and up to 100 supporters occupied the headquarters of the Malheur Wildlife Refuge. This followed the resentencing of Steven and Dwight Hammond, who were found guilty of violating the Antiterrorism and Effective Death Penalty Act of 1996. How the resentencing happened and why, from a legal standpoint, is explained quite well in this Popehat Lawsplainer - long story short, they were convicted of violating 18 U.S.C. § 844(f)(1), which has a mandatory minimum sentence of five years:

Whoever maliciously damages or destroys, or attempts to damage or destroy, by means of fire or an explosive, any building, vehicle, or other personal or real property in whole or in part owned or possessed by, or leased to, the United States, or any department or agency thereof, or any institution or organization receiving Federal financial assistance, shall be imprisoned for not less than 5 years and not more than 20 years, fined under this title, or both.

Whether arson actually occurred, meanwhile, is also an open question. A rather detailed, if one-sided, description of the events sympathetic to the Hammonds from TheConservativeTreeHouse.com has been making the rounds and paints a picture of an oft-persecuted family performing a series of routine controlled burns that performed according to expectations but were used to manufacture insurmountable legal pressure on the Hammond family - pressure which the family ultimately succumbed to out of expediency in exchange for a plea bargain. The prosecution's side, meanwhile - as summed up by this Burns Times-Herald article - is that Steven and Dwight Hammond set a fire to cover up poaching activities and also started a controlled burn in violation of a BLM-issued Do Not Burn order that inadvertently burned public land, both of which were found by a jury to be acts of arson. A roundup of both accounts, along with a copy of the original sentencing court's opinions, can be found here.

What actually happened? Without being at the trial or the fires themselves, it's impossible to know for certain. I will note that both accounts could be partially or even entirely accurate - it's entirely probable that the Fish and Wildlife Service were pressuring the Hammond family to sell their ranch to expand the refuge, and it's entirely possible that Steven Hammond started a fire to cover poaching activities. Neither possibility is mutually exclusive.

What we do know for certain, however, is that the Bundy family decided this case would be the case they would protest - which they did. They then chose to follow the initial street protest with the occupation of some buildings at the Malheur National Wildlife Range, where they plan on staying "for years", even if the locals would rather they leave. One of the occupiers identifies himself as "Captain Moroni" and the Bundy family has openly claimed they have God on their side; their church, on the other hand, strongly disagrees.

In short, nobody involved in this is a saint. Not the Bundys, who think they're on a mission from God; not the Hammonds, who at a minimum set fires on publicly owned land without notifying the BLM in a timely fashion and may have set a fire to cover poaching activities; and certainly not the federal government or its agencies.

So let's kill some people and go home, just like the government did in Ferguson and Baltimore, right?

Some of the activists occupying Malheur National Wildlife Refuge are racists. They are armed. I’m not saying armed racists should give anyone warm fuzzies.

But remember how every time a black boy is shot in the back his mugshots go up on national news? Some teacher is always called upon to talk about what a “thug” the deceased was. The victim is described as “no angel,” as if only angels deserve to be arrested alive.

Now the media is doing the same to these occupiers. CBS News is calling them terrorists.

We can admit that if they were unarmed, urban black folks the National Guard would already be there.

But that doesn’t mean their cause is unjust. Non-angels deserve freedom and property rights. They deserve not to be imprisoned twice on trumped-up charges.

Or, as Jamelle Bouie from Slate put it:

Law enforcement has been willing to use lethal violence against armed white protesters and the results were catastrophic. It’s no surprise federal agents are cautious; they walk with the hard-learned lessons of the 1990s. Even if the Bundys are paper tigers, no one wants to relive the past. In that, law enforcement officials are correct.

In any case, why won’t they shoot at armed white fanatics isn’t just the wrong question; it’s a bad one. Not only does it hold lethal violence as a fair response to the Bundy militia, but it opens a path to legitimizing the same violence against more marginalized groups. As long as the government is an equal opportunity killer, goes the argument, violence is acceptable.

But that’s perverse. If there’s a question to ask on this score, it’s not why don’t they use violence, it’s why aren’t they more cautious with unarmed suspects and common criminals? If we’re outraged, it shouldn’t be because law enforcement isn’t rushing to violently confront Bundy and his group. We should be outraged because that restraint isn’t extended to all Americans.

Besides, the protesters have some good points. Mandatory minimum sentencing is terrible. So is prosecutorial overreach. In order for those fires to be arson, there has to be an intent of damage - the poaching fire would certainly qualify if the government proved the fire was, indeed, set to cover up poaching activity (note that Steven Hammond was not convicted of a poaching offense), but the fire started during the Do Not Burn order was explicitly set to avoid damage, not create it. The Hammonds never should have been convicted of arson to begin with and certainly should not have had anti-terrorism minimum sentencing guidelines applied to them - the judge that originally handled sentencing saw as much and reacted appropriately.

The protesters are also right about something else - government ownership of land is terrible. It's terrible for taxpayers, who pay for 85% of the costs incurred by the BLM to manage public grazing lands. It's terrible for the actual original owners of the land, who stood up to the BLM long before the Bundy family grew dissatisfied with their fiscally pliant public landlord and only have a federally funded historical project to show for their struggle. It's terrible for the environment, which certainly didn't benefit from decades of nuclear testing or decades of misguided fire suppression policy.

None of this means we should support everything the protesters do or stand for, though. Attempting to shift land management costs from the federal government to state governments is the worst kind of incrementalism - not only is Nevada's record of public land management appallingly corrupt and wasteful, but such measures are a transparent attempt to privatize the profits and socialize the costs of land ownership. Public land needs to be privatized responsibly - not by giving it away to specific leaseholders and erasing the rights of other past users of our public lands, but instead by carefully auctioning each parcel off so that those that think they can profit the most from a specific parcel have a chance at securing exclusive ownership for that parcel. A successful public lands divestment policy could be based on the privatization policies utilized by select eastern European countries after the fall of the Soviet Union. Additionally, to borrow from Frederik DeBoer, if we truly honor the cause of these protesters, we must prioritize tactics that are likely to result in building a mass movement, rather than those that merely speak to the converted. We can start by signing the petition to overturn the minimum mandatory sentence that was unjustly applied to the Hammonds. We can lobby for the repeal of "Three Strikes" laws and the sort of broadly written anti-terrorist legislation that gives federal prosecutors so much leverage in cases like this. We can encourage as many people as possible to join political organizations that have stood consistently against mandatory minimum sentencing, prosecutorial overreach, and government ownership of land since 1972.

Pile Burning at Malheur NWR by USFWS - Pacific Region is licensed CC BY 2.0.